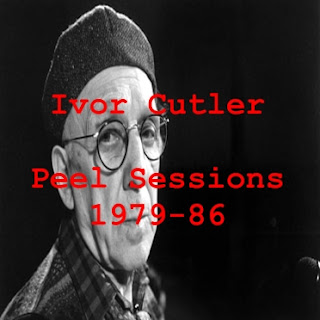 Well I had Gruts for tea last night,and they were delicious...I fried them in butter, served with a handful of chickweed, washed down with a quart of rainwater fresh from the barrel. I gave the leftovers to the dog...but he died this morning!
If there's a man for a crisis, its Ivor Cutler. If only he was still with us to make sense out of this absurd pandemic. He would have understood perfectly why people weren't allowed to lie down on the grrrasss in the parrrk(thats my attempt to reproduce his accent using standard lettering.....there's more!
"loook!" said fatha. "A patch of grrrass! Go and sit upon the grrrass and feel your lumps".He makes one feel like a child again, but not in the patronising way that the govern-ment does it, but by talking directly to ones inner-child.Instead of the Queen addressing the nation,or Trump...aww pleeeeze!(To whom i dedicate the poem "Lunatic",the angriest poem that Ivor has ever written,he says)...or indeed Macron!?...we need Ivor Cutler more than we ever did.
Altogether now...."Ooooooooh Pellets rolling round my feet,
look at the girl with the broken nose laughing out the windoooooow!"

This is great! Thanks v much!

I love that big talk, give me some more!

@Scotch Stu so you want BIG talk do ya?
I've already written the next episode for the remainder of the peel sessions...and to be honest I dunno what i wrote,so I can't remeber if its BIG oe not? What goes in a scottish Stew then?...'Gruts'???

Nice one. Keep the Ivor coming as long as you can be bothered to.
Lovely stuff.

Recipe back then was Irn Bru, Fortified Wine, Chips & Sweat of Heavy Industry

Used to come home from our less than half-full schools we'd been split into depending on whether our dads supported the blue or the green team, scoff down our grub, then run out on to the streets of Auchtershoogle to look at the best rain in the world, Scotch rain.

(Sorry. This lock-in is driving me up the bloody wall. We've had a week of no rain, that might be it for the year, and I can't bloody go anywhere!)

@Scotch stu....I've had my share of Scottish Haut Cusine in my lifetime, I went out with a Girl from Bellshill for six hard years,a green family by the way,...Lorne Sausage, piece'n'egg, Tatties, washed down with a healthy dose of Iron Bru (i'm being ironic...or ironic bru i guess?), and lashings of tonic wine as concocted by the venerable monks of Buckfast Abbey. I remember when the new lie-sure center in Motherwell was opened,and who cut the ribbon?...nun(geddit?) other than the deacon of Buckfast Abbey himself.(oh the joys of wordplay?)
And the chippies, the only places you can get your tumours served on a polystyrene tray deep fried in batter.
As you can see, i'm filling my lock in time writing this utter drivel....but it keeps me off the streets, and some old codgers alive until the next epidemic.

A nice wee present from Jonny. Thank you!

ps Jonny talking of Gruts, will you be posting it and Prince Ivor, as they are the only records not readily available.

@ anonymous...i wasn't going to post any of the official records...but as you asked i will post these two......how's that for service?

Jonny I love you. These two records have been unavailable for years, so to finally hear them would be wonderful, thank you!

I remember his Crete, rhymes with Greece! It just really stuck with me. Where are the Ivors of today?