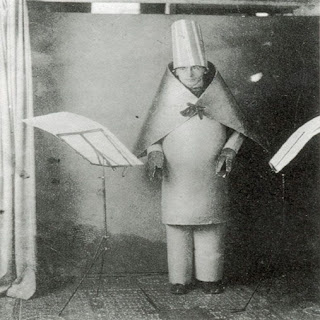 The kraut responsible for all this sound poetry malarky,....it had to be a German didn't it!?...Was the father of the DaDa art movement,as well as inventing sound poetry,and starting the Cabaret Voltaire in Zurich, was Hugo Ball......that's him in his work clothes on the artwork.
These are  his complete recorded works captured on wax cylinder in 1916,and as you may hear,nothing much has changed over the ensuing century in modern sound poetry today.
Most men aged less than forty were at the time being butchered on battlefields all over the planet during that notorious conspiracy to cull the working class, called 'the Great War'; but not Hugo,no.He was too busy saying stuff like "Blago Bung,Bosso fatake, ba-omf!" in a surrealist pub in neutral Switzerland.

"What did you do in the war daddy?"
"Well Son, I dodged the draught,ran off to a neutral country, dressed up like a prat and made up silly words"
"Thank god for that daddy,you're not as stupid as you look-ed"

Germany is responsible for some of the most shameful variety of interests,hobbies, and pastimes that have ever shaken the foundations of civilisation. We've had...i think you know whats coming here.....Jew-Hating, guillotining students, expressionism, playing at being Nietzsche, Nazi glee clubs, wearing kinky boots, inventing and imbibing morphine replacements,Markism, Wagner,Neue Deutsche Welle,sausage munching,and, last but not least...the Dada movement. Without which we'd still be cooing at Constable's "The Haywain",and listening to Elgar.....many people still do amazingly!?

DOWNLOAD and have a ball HERE!
Posted by Jonny Zchivago at 13:24

Your list of germanys past achievements should get some reaction from any passing snowflakes.
Got the popcorn ready.

Ha ha! Yeah, i've barely touched the surface of german achievement there. I doubt i'll get any comeback from that cock who accused me of racism a week or so back. He won't give a shit about the hurt feelins of Germans.
I like my popcorn sweet.

I prefer mine salty ... never trusted anyone who prefers sweet ... I should have known!

... and ... as somebody currently wearing kinky boots, when did that become criminal? i haven't even shared those photographs (so it must have been you).

... now ... allowing The Hoff dressed in a suit covered in fairy lights to become the global image of reunification? and whilst i'm at it ... the fucking Scorpions? Michael Schenker? Bono?

these people really have so much to answer for! expand the Haig ... people need to know what's really going on! keep telling the truth it will set us all free ...

@ badgerstump.....you are right not to trust a sweet popcorn eater,but as a sweet popcorn eater myself,by your very logic you shouldn't believe a word i say.
I never said Kinky boot wearing was illegal,just a very specific german pastime....its only illegal when accompanied by crotchless panties and peek-a-boo bras.
The Scorpions are due in The Hague (note the spelling!) this september on those new crimes against culture charges. The 'Hoff' is appearing for the prosecution after agreeing a plea bargain.

thank you very much,didnt know this even existed