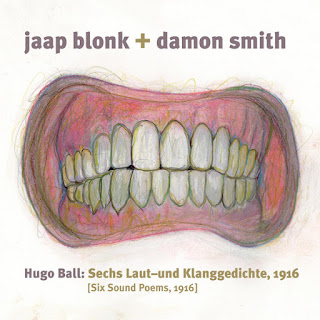 Arch Dutch dadaist sound poet, Jaap Blonk...real name.....has made a career out of these six Hugo Ball penned 'sound Poems' .He actually earns money doing this, so how stupid are we?
Apparently, according to his biog on Wikipedia, he went through a lot of employment failures and sackings before trying his hand at being a musician,which he was also a bit crap at.This left his voice as his last chance for gainful employment without the boredom and toil of 'real work', and it...er... worked!The one thing you can say about a poet,is that you can never say he isn't working.Even when laying down he can always claim that he's thinking about his next poem. Perfect.
As sound poetry has been around for longer than 100 years, one cannot claim that this is something startlingly 'Neu',but it is an-neu-ing,and it will still have Mr and Mrs Henry Normal running in fear from this challenge to their world.That is a testament to the sheer originality and subversion of the original work.....yes that word again....of Hugo Ball.
This recording uses the improvisational skills of double bassist Damon Smith....real name....that give it,debatably, a more listenable edge.Jaap's grunting and raspberry blowing is a bit more paletable when backed up by scraping discordant contrabasse strings.
I would like to see a Jandek and Jaap Blonk collaboration on day....Jaap and Jan.

Now this is definitely a furrow you can plough for me for really quite a while!

Starting with Spoke I'm convinced you've been making all of this shit up.

El Borbah....one man's utter rubbish is another mans total rubbish. I rather like both forms of rubbish.

Hey, one man's rubbish is another man's rosary! No one else noticed two tracks, 5 & 9 are missing? I want my MTV!

Bloody hell....its always doing this that RAR thing. I'll re-up it with the missing trax later on i suppose!?

Before you get too tired of your current focus, you might wanna sample the Oyvind Fahlstrom upload over at the Post-Punk-Monk blog-spot. It's some kinda Swedish radioplay/Axtherastical dada that you might find confusing!

Excellent, thanks; and by the way, this is the bomb.