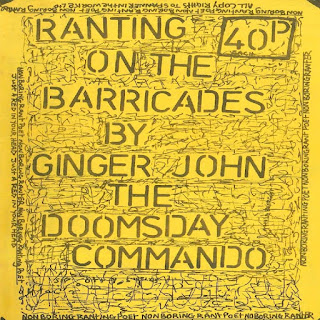 Ginger John is the kind of self-righteous yobbo who are razor sharp with the 'You're a Racist' finger.
So, as i've recently been accused.....again(?)...of being a stealthy racist,hiding my bigotry behind a thin vile veil of 'alleged' humour,accompanied  by a symphony of 'Twats' Pricks' and.....(no-one from England would use this one)...'Bonehead'!?.....nothing like a carefully considered argument is there?
My shoulders are broad enough, but this means that 'Ginger John' is in line for a slagging,and his irritating ilk of finger pointing right-on bores.
Ginger....,notice how he gets it in first so the Ginger prejudice section of the sparse audience can't hurt him...'cus he's funny?
You will be relieved to know that this ten minute tirade will be the last 'Ranter' in the spoken word season on DIE or DIY?,and its exactly what you expectorate it will be, Spittle soaked consonants shower the empty room with Gob, the sweary words race out of his angry red face surfing on a perfect wave of saliva at a million miles an hour,and he's.......you guessed it....a militant socialist!...I wonder where he got that obscure philosophy from?....and ...Oh Yeah.....he's not a racist of course,...... but you fucking ARE!

1. Perils of a Pedestrian Piss-Artist
2. Things Have Changed on the Magic Roundabout
3. Paranoid Attack
4. Talking From Yer Bum... oops, Sorry.
5. By, It's Changed Since I Was a Lad
6. Serialising the Revolution
7. Zidiack Braindistort
8. Radio Problems
9. Tesco Chainstore Massacre
10. OK, Yarrrr!
11. Herpes From Outer Space

Being called a Homophobic Fuck isn't all that bad, but being called Not very saintlike, now that would make my blood boil!!!

@ henk... yes, i spent many a tear filled night over that one. Not saintlike?...me!?..cheeky cunt.
All because i didn't publish his boring comments about putting slightly incorrect versions of records on the blog....ie...superior versions of...!

Then again, you were also called an asshole in one of those comments, that should make up for all of it right? I'm a total asshole and I feel good about it!

Ah yes...the asshole one...and and Idiot...they were my proudest moments, because it was from David Koresh's surviving son.....he came back for more later too...he no like me very much.