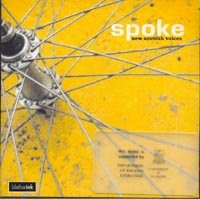 Not sure that Ivor Cutler would approve of these potty mouthed anarchists but,staying in spoken word Scotland,here we have some sweary scottish realists from the year 2000.Sounds like a title of some bad horror movie doesn't it?
A cosmopolitan stew of (mostly) Glasgow-based writers captures the excitement of the spoken word scene in Scotland at the turn of the century. Bletherers include Bobby Christie, Anne Donovan, Jim Ferguson and Nick E Melville.And don't expect a torrent of Scottish accents either as there are a few interlopers. Sassanachs with a barely hidden west midlands drawl talk about drugs and alcoholism.

The Trainspotting stain on the imternational Scottish image, is further enhanced here unfortunately.The stench of Buckfast and vomit was becoming a cliché by the turn of the millenium;but at least this stuff doen't make it sound exciting,with Iggy Pop(as big a prat as he is) as a soundtrack to an overdose or a painful withdrawl.Wow! Smack Yeah! Say YO to drugs!
Say NO to Catholicism,just a smidgen less,....well..maybe more actually,.... horrific than Drug abuse,which rears the grotesque head of sectarianism and the dream crushing millstone of Catholic Guilt.
Sug Hanlan's epic poem about "The Song That Started In The Middle Of The Bus", is an 'Ancient Mariner' of our times.Providing a microcosm of Scottish culture to firmly bury the spectre of cabre tossing in kilts with no underpants,prancing round swords while playing bagpipes and eating raw freshly killed Haggis.This is a world of unfulfilled,but modest dreams, like thrashing England at footy.Giving someone a good kicking,especially England Fans,and maybe even receiving a good kicking,depending on how pished you were.But In the midst of all this hopelessnes there sprung a glint of hope....a song that brought everyone on the Hampden park special together.Everyone was united in their hatred of the royal family and Maggie Thatcher,who turned us all into Prostitutes.Of course there is always one character who's to far gone to reach.
Chic,or Chick,depending on how you spell it,was the really mental character on the Bus.It must be something to do with the name because he reminds me of a nutter, also called Chick, whom i had the questionable privilege to meet in Bellshill one christmas;which is, for those who are blissfully unaware,is a cheerless satelite town on the outskirts of Glasgow.He was adamant that Marc Almond owed him a million quid,because it was Chick who wrote all those fucking songs, d'yer ken? Including, I may add, 'Tainted Fucking Love"!!!....chic, or Chick, had added that extra pronoun in the title himself. I didn't dare point out that someone else had actually written 'Tainted fucking Love',and that 'fucking poof Almond' didn't actually owe him for that one. "Say Hello Wave Goodbye" yes, but his biggest hit.....no? I heard later, that Chick, or Chic, or Charles, had indeed 'waved Goodbye' after he set his squat on fire whilest off his tits on a cocktail of drugs and booze,succumbing to the flames.Marc Almond was too busy to comment.

(Shug Hanlan also wrote a short story that uniquely combines working on an Oil Rig and Prog Rock....sounds like hell ,but anyone who can combine those two subjects needs checking out....Check out more of Shugs literary works at his website HERE!)

DOWNLOAD from up there HERE!
Posted by Jonny Zchivago at 11:31

Thanks a fucking million Jonny for posting Spoke after Ivor. None of us are worthy of sharing the same Scotch Sitting Room as the great man. Great Chic/Marc Almond anecdote.

My pleasure Shug, i enjoyed Spoke greatly. The fact that Cutler was Scottish sort of made it natural for you lot to follow him. Gets a bit english from hence forth....although there is a scot on the next album of highly pretentious sound poetry.

A little after the fact but thanks for introducing me to this. Finally got around to listening to it yesterday afternoon and thoroughly enjoyed it.