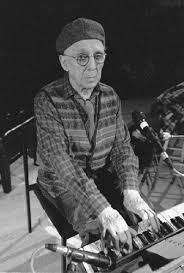 More inexplicable and absurd word-smithery from Scotlands finest poet,and, in the words of the BBC, 'legendary Scottish Surrealist'.

1. Episode 1 : Poems, songs and relaxation tips from Ivor Cutler and friends including fishy verse and how to jazz up mince.
2. Episode 2 : Alison O'Kill wants to read Ivor Cutler a poem, while Murray-Orr can't think with the sun in his eyes.
3. Episode 3 : Ivor Cutler and his friends present dark tales, offbeat songs and some tips for aspiring poets.
4. Episode 4 : Poet and composer Ivor Cutler on bargain hunting, water flowers and 'Beelyploomkins'.
5. Episode 5 : Songster Ivor Cutler slips a disc and shares his secrets about moonshine, housemaids and a bully called Smith.

DOWNLOAD whatever a stuggy pren is HERE!
Posted by Jonny Zchivago at 18:16

Thanks for all the Cutler Johnny. Dunno if he is Scotland's finest poet as Tom Leonard was a pretty fine one too.

Hope all is well with you.

Oh c'mon Jonny Z, you know that "greatest" accolades are subjective. Robert Burns anyone? Robert Louis Stevenson? Alison Cockburn? But then it IS your page, not mine or anyone else's.

Perhaps then only "greatest" title that is indisputable is that of Greatest Human to Have Lived or Ever Will Live. which of course is Bono.

Jonny thank you again for all the Ivor

I did say Finest not greatest!.....Burns?...Nah! Stevenson, over rated pulp fiction....And i dunno who alison cockburn was!...Still there is nothing there that can hold a light to that english genius of the written word...Simon Le Bon....which is where Bon-o nicked his name from, and his plagarised lyrical genius from. The real Bard of the west midlands.....puts Bill Shakespeare into perspective. "You're just about as easy as a nuclear war" clinched it for me.

I dunno, I've never really been able to equate Ivor Cutler with anyone else. His is about as singular an experience as can be found. That said, sounds like I'd do well to overlook the Bo-no appropriation and hunt down Simon Le Bon. Any suggestions JZ?

Apart from the recomendation to avoid anything by Le Bon for your own safety...."Seven and the Ragged Tiger" is a master class in pretentious incompetence. Apart from being the Bard of Brum,he's probably also now Barred from Brum.Deadlier than the covid virus.