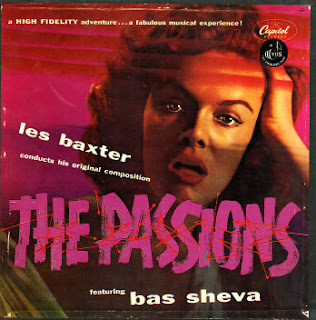 If you have a preponderance for recordings of a young lady's screams, wails, whimpers, howls, grunts, and moans.Then this is the 10 incher for you.......the size of the record by the way.
Exotica and easy listening legend Les Baxter, attempts to capture the complex world of a woman's emotions in sound,using the wide octave range of the obscure vocal talents of Bas Sheva; which is the Ashkenazi Jew pronouciation of Biblical saucy temptress "Bathsheba"...so i'm told!
Bas wasn't around for very long,as she died while working as a singer on a cruise liner in 1960, from a fatal diabetic reaction to ship food. Leaving just this crowning achievement of horrific wordless moaning to keep her soul alive forever.All in glorious Mono too...and it takes no prisoners,so begin at a low volume.
One more record that is guaranteed to clear a room. Always keep it handy just in case unwelcome guests arrive,or outstay their welcome.
Very good for Social Distancing as recommended by your national governments in 2020.

DOWNLOAD the dangerous world of a woman's emotions HERE!
Posted by Jonny Zchivago at 10:03

I wasn't around in 1954, but if that's what lust sounded like back then, I'm kinda relieved I arrived somewhat later!

Literary Note: Wish to fuck that would have happened Captain Ahab, might have made "Moby Dick" a few chapters shorter.

Actress Nora Hayden (Angry Red Planet) was the model on the album cover!