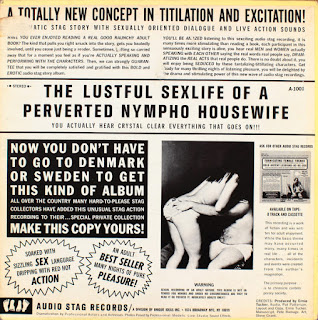 DOWNLOAD this filthy deflowering of romance HERE!
Posted by Jonny Zchivago at 11:56

I've got a third of these LPs called "Hired Stud wants to Fuck" or something like that. If you don't have it I could make rip of it.
Picked it up together with a whole bunch of Pornophon 7" (Scandinavian vinyl pornography) at the Hsons store in Stockholm before it so sadly was forced to close. No doubt the only store of its kind in Scandinavia still having an entire floor dedicated to such a selection of adult books and magazines (most of it old stock from the 60-70-80s).

Is it me, or does that look like Cosey on the cover?

She does bare a passing resemblance to Cosey,but i think its more your standard seventies slut look. In 1970 she was stuck in Hull,uk, where no-one had sex and no-one can leave. Also the voice on the record can't be hers, because it doesn't have that horrendos Hull accent.I don't hink she started getting her muff out until about '73 anyway.

This is going to look great up on the mantle -- thanks!

I remember an article about the guy behind these albums in the Ugly Things...there was a 70s funk boot comp called SHAFTMAN that sampled tracks from the album of the same name that this guy did.

This cracked me up in the morning! Hilarious!

Yeah great stuff innit? One must have another listen.

does anyone know the names of the actresses , sounds like betty luster