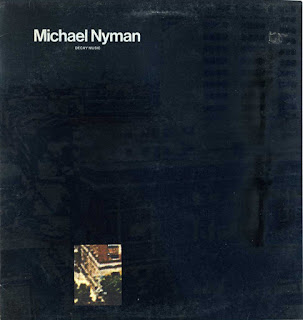 These two works by a thirty year old Michael Nyman, "1-100" (composed in 1975) and "Bell Set No. 1" (1974) are built around the musical concept of decay.Which can also apply to the human being from the moment they are born,both physically and mentally."1-100" is played at half the speed it was recorded to further extend the decay of the tentative sounding chords that Nyman taps out on his piano,although it sounds like he would have benefited from the use of Charlemagne Palestine's imfamous Bosendorfer Grand,as the decay of the notes seem pretty short to me? It was written for Peter Greenaway's film of the same title but rejected because it was too long,which is what most people say about Greenaways films, so he's got a nerve!

Nyman, of course ,made his name as the soundtrack composer for all of Greenaways films,which are rather pretentious,but enjoyable examples of the moving image.I rather like "The Daughtsmans Contract "out of all of his films,which features a emulation,by Nyman, of the Baroque classical music of Henry Purcell,rather than anything neo-classical,or minimal. Which shows that Nyman is at the least, very versatile.
This one does tend to sound like a recording of someone trying to write a tune on the piano and failing;but you can't beat a bit of looooong decaying notes rattling around an empty room of an evening.

DOWNLOAD and decay HERE!
Posted by Jonny Zchivago at 12:53

I'm liking where this is headed. Great stuff as usual. Thanks Jonny!

I think Nyman was 30 at the time; otherwise, he would have been like 12 or something when he _allegedly_ "coined" the term "minimalism" in the late 60's. Of course, age doesn't really matter, as I'm not all that sure he did any of that anyway.

Shit...my adding up is rubbish...yes he was 32 i think...i shall edit my glaring error!

Best thing Nyman ever did. What is quite amusing is that there is a lot of minimalist theory/mumbo blurb on the back of the LP sleeve and then it says something like "oh and then we just overdubbed a few takes". Great for wasting away afternoons on the dole to, as the light fades in some South London room and the last of wine begins to dry your mouth out.