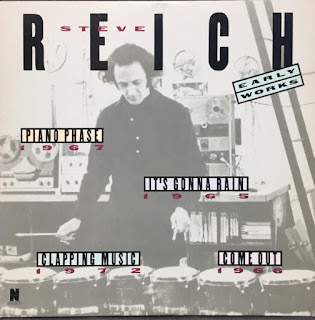 We all feel rather too clever by half when we add some recorded dialogue to our homemade experimental miesterwerks don't we? Well,it may automatically qualify you to call yourself 'Avant-Garde' but this tactic has been around for as long as pop-art itself. In 1965 the not-so-young Steve Reich discovered that if he played one tape slightly slower than an other tape playing the same thing,it would slowly become out of phase and we get a jumbled up confused mess abstracting the meaning of the original to the point of the nonsense that it is. So Steve could just set the tapes running and sit back to let the music,or non-music, write itself. Another idea that Eno nicked,but in his case he used tape loops which eventually came back into to phase momentarily before slipping back out of phase again.
Reich wasn't the first to mess around with recorded dialogue of course. As far as I can assess that honour goes to Brion Gysin, followed diligently by William S. Burroughs, who were a direct influence on such Industrial types as Cabaret Voltaire, and Throbbing Gristle,before it was dumbed down by the availability of the Fairlight Sampler.This started a separate thread leading to Paul 'N.n.n.n.n.n.n.Nineteen' Hardcastle, and a flood of "Ah Yeah's" on yer kiddie-pop hits like Timmy Mallets version of "Teensy Weensy Yellow Polka-dot Bikini"......follow that with samples of Colonel Kurtz mumbling "The Horror....The Horror!"
So the moral behind this ugly truth is that no matter how avant garde you think you are, there's always some intellectual minnow who are gonna show your genius up for the sad cliché it has become,as it becomes inclusive rather than exclusive. Timmy Mallet...the great leveller.
Naturally, Steve Reich was messing with dialogue well before it became an Industrial Cliché,but his main innovation was his out of phase compositions, as represented here by his "Piano Phase" piece for two piano's.The discipline involved for two pianists to play at slightly varying tempo's is a thing of awe for me. I often struggle to play constantly in 4/4 time,so when my tempo wavers its incompetence rather than skill. This is the piece from where the Steve Reich style sprung from,and which launched a thousand Philip Glass compositions. Terry Riley was an influence it is said, and also, allegedly, Moondog (coming up soon).
There you go, I managed to write about Steve Reich without a single reference to anything  Nazi.....i am now patting myself on the back.Just you wait for my take on "Different Trains"...I can't wait!

DOWNLOAD the first reich HERE!
Posted by Jonny Zchivago at 10:56

I cannot be bothered to listen to this but it was a real pleasure again to read your "review" :)

Ha Ha Ha, it was the same for me Wolfie.
Thanks for reading.

No not blocked, just Amazon and Mediafire trying to get you to shop at amazon....try again,usually gets through on the second attempt.Don't let them fool ya.

These recent posts serve only to confirm me in my opinion that so-called minimalism sucks. By which I mean it literally sucks all the air and life out of the room with its inane exhausting tedious repetitions and banal gibbering neurotic phony optimism. Give me serialism and the horrors of Darmstadt any day.

I hope we haven't said anything to put you off Mr Anonymous?

I'm fine with both minimalism AND serialism and the horrors of Darmstadt, personally. Also, check out the solo performances of Piano Phase--here's the first: https://www.youtube.com/watch?v=AnQdP03iYIo

I read somewhere that serialism was developed so the Nazis could communicate secret orders back and forth. Probably why they lost, no one could decipher WTF was being said. Yeah I like it all too. If it pisses off mr. anon, all the better. Crank up the suck! The quicker the air's pulled out of the room, the quicker the feeble types drop.

I want to add that not all minimalism sucks imho: There was Soft Verdict alias Wim Mertens and the early Michael Nyman (with a nice 7" from 1981 produced by David "Flying Lizard" Cunningham). They created some pieces of real beauty. But although "officially" minimal music, there are melodies and you could consider it as "pop" in comparison: https://www.youtube.com/watch?v=dmtY6U0KwoI

I read somewhere that mimimalism was a plot to erode the critical faculties of American citizens so that decades later they would think it was a perfectly good idea to put Donald Trump in the White House.

I thought that was House music and lashings of Ecstacy?

I couldn't agree more! The whole tenor of my adult life was watching the rest of the world try and cancel out all the noble ideals we dirty fucking hippies tried to implement. So *everything* got dumbed down. Lowest common denominators can get reeeeeeeeeeeeeeeally low...

That said, some genres were easier to ruin than others and, before they could despoil all the music in the world, they had to figure out which genres were easiest to trivialize. I could seriously entertain an argument that minimalism was hyped because they recognized how easy it was to hack.

parmalee, if you're still on this thread, what is it that you do?