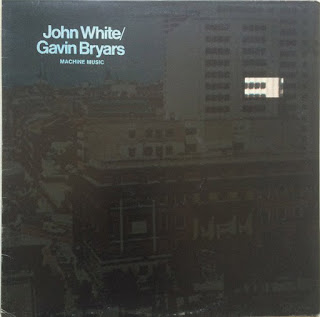 John White was in the Scratch Orchestra as far as i'm aware,but apart from that this was his obscure moment in the murky moonlight. In my local cheapo shop there's a nasty brand of aftershave called "Murky Moon",and if it was ever advertised on TV the perfect soundtrack to the drunkards aroma of choice would be John White's eerie "Drinking And Hooting Machine",played out on a bunch of empty beer bottles.Whether the beer was snaffled by our Avant-Garde heroes is another unanswered question .I'd like to think that, yes, is the answer.You can't get more avant-Garde or as inspired as a drunk artist.Even as I type i have a beer in hand to accompany my beret and sandels to complete my avant-gardist cred.
The rest of the tracks don't live up to the bottle blowin'one which would probably be the avant version of 'the Single' from the album?
There's not much actual machine music involved which is a relief,as the modern day yoof (sic) listen to nothing but 'machine music',as slowly we are replaced by thinking 'feeling' robotics.No robots on this,just greats that will never be replaced like Fred Frith, Derek Bailey and Brian Eno;who all play guitars on the Gavin Bryars side. A tune which also appears, bizzarely on Bailey's first solo guitar album from 1971.
Oh Yeah.....the minimalist bit (yawn) is track two,which is a Steve Reich-a-like piano number....very nice,but this is a better album than any of Steve's because its less up its own fucking arse!?

B –Gavin Bryars The Squirrel And The Ricketty Racketty Bridge

DOWNLOAD from this music machine HERE!
Posted by Jonny Zchivago at 19:53

hooty and the blowfish

With this tangential Scratch stuff, sounds like your building up to the alleged assassination of Cornelius Cardew. I'm dying to hear some sane commentary. It used to sound wacky to me, but not so much anymore--and John Tilbury doesn't seem like a wacky sort.

Indeed, Scratch Orchestra coming.....i'm not really in a conspiracy theory place of late. I believe that famous people also die of natural causes and accidents like us. I think that Cardew would agree with that. Everything points to a hit and run incident as far as I can see. Conspiracy Theories are basically a kind of trauma handling device.Reason is shut in a room in the brain, so we can cope with the loss of a person we love..even if one has never met the person. He was run over...cope with it.

Yeah, I can live with that. Shoddy reportage with sloppy, inconsistent details is, often enough, just that. And whle I wouldn't put it past MI5/6 (or FBI/CIA), when there's nothing strongly pointing towards them, it just distracts people from the very REAL crimes that we KNOW they've committed. Tilbury did only mention this in an endnote--at the very, very end of his million page bio of Cardew--so it's likely that even he wasn't all that invested in this theory.