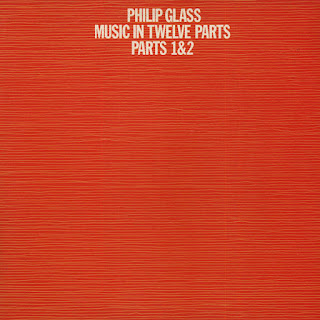 Before 1977,nearly all of Virgins best albums were released on their budget 'Caroline' offshoot, and for many this was their first exposure to Philip Glass's take on structured minimalism......although Glass himself doesn't agree with that definition of his music. It certainly a more academic and considered form of Minimalism than most of his contemporaries, except maybe later Steve Reich, with no room for musicians to be let off the leash at any point.
I certainly play Glass's music more than any of the other 'minimalists',probably because its more accessable, and melodically more interesting.
Only one piece was originally written, which was called "Music in Twelve Parts" because it was originally intended to have twelve lines of counterpoint harmony, but when Glass played it to a friend, she asked him what the other eleven parts would be like. He found the misunderstanding interesting, and wrote another eleven parts over a period of three yearsThe thing about Music in Twelve parts, is that this album contains the greatest hits of the actual 12 parts that were eventually released in the 90's. Part one is a wonderfully medetitive piece, backed up by more uptempo classic Glass....it repeats but each phrase has a subtle change that slowly transforms the melody into something different without the listener really noticing.......part 3 is ok,but its downhill from there;so stick to the original album I say!...I can take 20 minutes at a concert and forty minutes on an album before my mind starts to wander.So be satisfied that the original concept was just 'Part One' and relax. Glass should have just left it at that too,maybe calling it "Music in Twelve Part,Part One",and never composing the other eleven;rather like the non-appearance of the Third part of the Residents' "Mole Trilogy", or Schuberts 'unfinished Symphony?

DOWNLOAD in one part HERE!
Posted by Jonny Zchivago at 10:08

i double dog dare you to post North Star. yuh scared? nyah! nyaaaaaaaaaah! Also, I downloaded THE NEW SCOUTS OF UZBEKISTAN ALBUM - "AIMLESS AND DRIFTING" from your sidebar.....pretty great!

North Star....i am either too scared or too bored with minimalist posts.

"Aimless and Drifting is quite old now isn't it?....i'm waiting for my flakey drummer to come up with some ideas....you know the usual drummer scenario....he throws a tantrum saying 'I want to have a go' then you're waiting a year and nothing has materialised...album 2 was entirely my work,even with another drummer,but he still got a songwriting credit so as not to hurt his feelings.

Pleased you like it......but remember 'You're not Billy Stewart'.