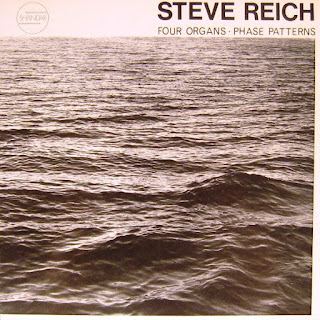 My diseased mind habored a cruel fantasy that Glass and Reich were vicious minimalist rivals, often seen bitching about each other, during lonely drunken tantrums, throwing darts at their nemisis's mugshots,and favorable press cuttings.
It seems that my fantasy will stay just that, a fantasy, fermenting in the mind of this bitter and vindictive crypto journalist until his grave.(Oh Shit I've started talking about myself in the third person...Help me!)
Yes, Philip plays one of the four organs in the title piece,alongside minimalist chum,Steven Reich, unless,that is, they were having an 'organ-off' that accidentally got recorded.......who won is open to debate, but it sounds like it was all written down and interpreted accurately enough for it to be one of Reich's most seminal pieces. I would have thought that Reich would have allocated the role of Maraca shaker to his not so-bitter rival, but no, Glass got to play one of the actuel organs!?
If you don't know what it could possibly sound like, then download it.If you wanted any clues beforehand,and rightly so, its repetitive,out of phase in swelling waves like the cover photo, with harsh sounding organs.Its takes no prisoners,and could result in anger directed at the listener from those innocent parties who are not ready for such challenges to musical convention.....mainly WAGs*

* a footballing term for 'Wives and Girlfiends',most famously blamed for the failure of the England Squad to win the World Cup sometime in the noughties......the real reason was that they were just crap!

DOWNLOAD or is it just a phase you're going through?HERE!
Posted by Jonny Zchivago at 00:38

No, Reich and Glass were allies-- played in each other's ensembles, critiqued each other's latest scores, discussed the ramifications of patterned arpeggios well into the night. They went into business together at one point as a moving company, so they could buy a lorry big enough to hold all their gear and write it off as a business expense.

My interest in this stuff started because my parents gave me tickets they weren't gonna use for a "new music night" with the Boston Symphony Orchestra. There were four pieces on the bill, the first three by dour Scandinavians that would all have fit in splendidly with Bergman movies... and then they dragged most of the chairs off the stage, and brought out several vibraphones and a Farfisa(!), and Steve Reich and his ensemble came out and played "Music for Mallet Instruments, Voices, and Organ"-- and it was wonderful, everything I liked about raga and "Dark Star" and "96 Tears" all rolled up into one glorious eternal now.

Had to hear it again! Next day I went record shopping, but the only Reich I saw was this one. I thought it'd be worth it because Michael Tilson-Thomas (who'd played the Farfisa at that concert, and conducted the orchestra for the other pieces on the bill) was on it. No such luck-- it sounded to me like a concerto for dial tone.

I did eventually find the DGG box of Drumming, which had Mallets on the third disc, and it was as lovely as I remember, and Drumming is pretty engrossing as well. I have more Reich on vinyl than any other minimalist, and there's a lot of his stuff that I dearly love-- Come Out, Tehillim, Music for 18 Musicians, Different Trains...

An old favorite this. So if one of them makes a mistake, does the whole deck of cards fall apart? I'd like to hear the outtakes.

You're right about other listeners. The only time my hi-fi was assaulted was when I was taping Reich's Early Works (keeping the vinyl pristine for instant return). My mother, never bothered by your typical 80s nastiness was literally fazed by 'Come Out'. (I wish I'd kept that recording but CR-90s weren't cheap.) I do recall that we were well into the thousands of buzzing flies uh..section

Its weird what records get to people, my father drew a line at The Sweet....anything else was fine,Throbbing Gristle,Suicide,...er...maybe not Whitehouse.....My mother was a bit more sensitive,she didn't like the Sex Pistols and those rude words,hated that 'orrible PiL,but quite liked Steve Reich, especially Philip Glass.
may the cosmos rest their souls.

Oh come on, any stories of Glass and Reich having a hissy fit with each other?...we want the Gossip not the feel good stuff.

I've always wondered about Reich's and Glass's preference for the combo organ--was it simply a practical matter? They were relatively cheap, portable, and plentiful (back in the day). I mean, I'm partial to combo organs too, but I'm also well aware of their technical limitations, i.e., inherently unstable tone generators--with the slightest atmospheric shift, at least one of the twelve oscillators is _guaranteed_ to drift. I'm cool with that; in fact, it's a plus! But I would've thunk Reich and Glass were more keen on precision and whatnots? Regardless, this stuff just sounds weird played on a tonewheel organ (Hammond) or a "proper" electronic organ.

Addendum to preceding comment: OK, I can't leave it at that. Sure, later (mid 70's on) combos used TOG chips which, of course, do not drift, but Reich and Glass typically used earlier organs, with 12 individual dividers. That said, TOGs only used 8 or 9 bit divisors, capable of producing a musically satisfactory equal temperament to MOST ears, but... I dunno, La Monte Young would have pitched a fit about that.