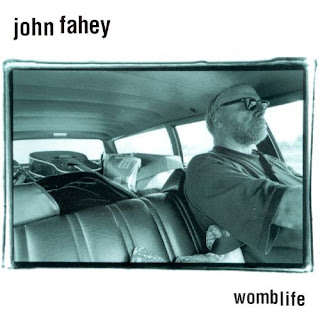 You have to give him his due respect, John Fahey carried on regardless despite what opinionated gobshites like me say.
This fan-losing experimental late-life comeback album from the nineties,when the man was a name-droppers dream.
"Have you heard the latest Fahey album......NO!??......it's fantastic; but then again i've been a fan since the early eighties,.....wot????..... you've never heard of him?.....oh dear,you don't know what you've missed"....!
Well,we do know what we've missed thanks,and most of it we wish we had.....rather harsh,but the object of todays scything attack are Record Snobs,especially ones who get their tastes from tasty muso-zines like "The Wire", who, in the mid-nineties, were busy championing John Fahey.By 1997,i had binned off my subscription to this magazine, with its endless articles on the "Glitch" and members of Tortoise talking about really early jungle as a influence.
It was the start of music journalism becoming nothing more than a portal for uncritical star worship,no matter how underground or unstar-like were its victims.John Fahey was one of these poor unfortuate artistes whose canon were unduly elevated to godlike status,and now the public wanted MORE!?
To artists with a realistic world view,this can be a distasteful end to a long ignored career.Now you can put out any old crap and your new trendy fanbase will laud it.
So, Fahey scores plenty brownie points avec moi as he alienates his original fanbase with this distinctly un-folky ambient jandekian guitar driven erazerhead soundtrack experiment,that would also confuse his new 90's fanbase......neither of which included this gobshite, but I am a fan of John as the pain in the arse person I suspect he was.John 'the man'.
Its up there with "Metal Machine Music", OMD's "Dazzle Ships",Scott Walker's "Tilt" and PiL's first and third album's, as one of the best fanbase fuckers ever made?

DOWNLOAD or abort HERE!
Posted by Jonny Zchivago at 00:01

City Of Refuge was a pretty big stick in the bum, too.

I think they're fantastic. A real aural palate cleanser.

this is the one recording of his I like on it's own merits....the other one is some hour long live boot from uk (i think) with some organ player...lots of noodling......superior to my ears along with this one to his other..outputts

If this one floats yer boat, there's an ep called The Mill Pond that'll etch metal given given the opportunity…

Its much like a coverrecord of the music of Harry Partch and his instruments. Like 'on the seventh day petals fell from Petaluna'. Great.

My 'Wire' subscription lapsed in 2003 after 15 years. It had long since turned into a news-sheet, events-bulletin and doctrinal-refresher for the frequent-flying festival-and-symposium-attending tenured lefties with laptops bearing "This machine kills fascists" stickers. Have very occasionally picked it up since then but little if anything has changed.

As promised, here's the Red Krayola/Fahey:

Funny thing about The Wire, _all_ subsequent writers for the magazine seemed to have adopted that weird "hero worship" stance, no matter whom they were writing about. Some of my own projects have been reviewed over the years--including some full-page spreads (woo hoo!)--and there's never any actual criticism. It's all praise and really over-the-top, especially with loads of arcane references and such-like. On one hand, I ain't complaining--those good reviews come in useful sometimes; on the other, well, really? Personally, I genuinely appreciate it when someone faults my excessive sloppiness, say, or when "inspired by" becomes "shamelessly derivative." 'Cuz spiritual growth is what it's all about! Seriously though, honesty has become a rare commodity.

Like with the notion of Fahey being a "difficult person." I met him a couple of times and he seemed no more "difficult" than anyone else. When playing at the Tractor Tavern once in Seattle, sometime in the 90's, he had to borrow a guitar from Rick Bishop, as he actually did not bring one. That ain't difficult, that's just John Fahey and it was pretty funny. There's always gonna be those who regard justifiably righteous indignation (see: Fahey and Joni Mitchell) and "eccentricity" as being "difficult," while they consistently give entitled pricks a pass.

Thanks for the Krayloa/Fahey parmalee. I've heard Sir Rick mention that show. Another tale he tells is about once when he complained about people lumping him in with the whole american primitive thing, Fahey replied "You sound nothing like me. You play like the devil." I alwys new Satan was a member of Sun City Girls, I just couldn't figure which one it was. Maybe it was all three.

Gonna grab this one and 'City Of Refuge' as my intro to Fahey. Here in the center of Canada all I knew of John Fahey was that he played acoustic guitar.... acoustic guitar drove me nuts when I was 16. That was old people music!! Well I am now a qualified old person downloading acoustic guitar music!!! Many thanks!?!?

Good choices Brian....i'd say leave it there. I still have urges to smash acoustic guitars.Just the sight of them produces a red mist of mindless anger. The times a party has been ruined by the appearance of an acoustic and a chick magnet singing american pie means there should be some kind of final solution for such unattractive objects.

@kevinesse -- I'd like to hear the Fahey boot with the organ player, do you recall who it was? Fahey collabs were always interesting. I really like The Epiphany of Glenn Jones (Fahey and Cul de Sac), though it might be a bit too "post-rock" for some. He did some recording with No Neck Blues Band when he stayed with them, as well. Never heard though.

@rev.b -- All three. Definitely. Ii like Rick's and Alan's stuff, but I really miss SCG. And the place they had in Ballard was incredible--full gamelan set and an insane number of stringed instruments from all over. I spent my adolescence in Phoenix, which is mostly an appalling craphole, but at the time--late 80's--there were a surprising number of decent bands there and the record stores were unbelievable. In retrospect, it doesn't make a whole lotta sense, given whole shitty it was in every other respect.

@ parmalee, The Girls were the only reason I ever considered visiting Phoenix. I remember that little wafer of time when it was sick with great bands. I thought so anyway. Sounds like Jonny had a brush with the hell that is Arid-zona. I do make a point to catch the Bishops when and if they play anywhere nearby.

@Jonny, Couldn't agree more. When I see an a-puke-stic guitar whipped out, I leave the room. Wish I could find the Fahey quote about that sort of thing, It went something like 'He's a folk musician. He's young. He's pretty. He's sociable. He wants to be the center of attention. He wants you to love him. The hell with him.'

@parmalee
write up of the show: http://tela.sugarmegs.org/_asxtela/asxcards/JohnFahey1999Brudenell.html