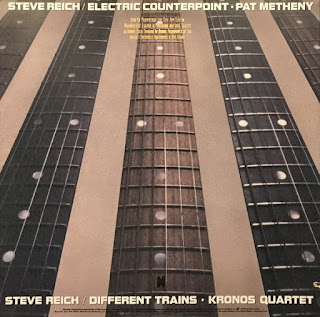 I notice that these minimalist posts have caused controversy and stimulated conversations,then lets see if we can up the ante as This is my Third (steve)Reich post........just one badly constructed sentence in and i've done it...a Nazi reference!...And why not? The main theme of 'Different Trains' is Shoah related,comparing the role of the railways in the holocaust to their more positive peacetime job.
One of the most insideous roles of the railway in modern times would be taking one to a Pat Methany concert. Such a pospect would have me munching down  Zyklon B by the tin and filling my lungs with the sweet relief of cyanide fumes. I've never really listened to the Methany side of this album,but side one is one of Reich's greatest hits. Recreating the relentless journey to the death factory, as played by the Kronos Quartet, interspersed with dialogue samples from Holocaust Survivors. Not that there were many Survivors from Treblinka for example....67 out of approx 900,000......as we are told.The actual figures have been in a state of flux ever since the liberation of Auchwitz, in order to get that magical six Million number as prophesized in Jewish folklore which would precipitate the creation of the Jewish homeland. Auchwitz was rounded down by a couple of million,Majdanek's victims were altered from one million to 78,000 today. Many unanswered questions remain about Treblinka. How did they asphyxiate so many people with just one captured Soviet tank diesel engine.Its notoriously hard to gas even one person with Diesel fumes(which contains quite a lot of deadly...Oxygen!?) nevermind upwards of 3/4 of a million people......no Zyklon B,not even for delousing, at Treblinka.
Oh Christ!Before i'm labelled a poundshop David Irving,No i'm not denying that the so-called Holocaust happened (bla-bla blah!).There's plenty of evidence that it most certainly did. Its just the massaging of the figures and facts of the 'Extermination' camps that one has issues with.Most of it was for post-war anti-nazification reasons,and some was to build pressure for the creation of Israel.....History needs to be revised.....Bla-Bla-Blahhhh!...i'll shut up now.I'm starting to bore myself even more than if I was at a Pat Methany concert at the edge of Hell.Holocaust fatique is also a real problem.
I dunno why the Nazi's bothered with poison gas at all.All they had to do was play Methany's back catalogue and all the camp inmates would have thrown themselves alive into the cremation pits to escape the suffering.
Well you gotta write about something haven't you?
Apart from the sheer joy of liberal baiting,I haven't been called a Nazi for a long time now, so its about time the anti-anti semite mob turned their attention away from Jeremy Corbyn and organised a boycott of this blog. I have also yet to see any evidence of any Anti-Semitism in The UK Labour Party either.There's plenty of anti-semitism in the Israeli government, as Palestinians,you know the ones on the other side of that massive wall,the ones whose kids get bombed, are actually 'semites' too, believe it or not!? And their lives are the exact same value as that of their semetic cousins on the other side of the wall.Wait and see if Steve does a composition about that human tragedy in the near future....i think not.No-one gives a shit, because they're arabs,and you won't get the funding.

And to think this is the redacted version?I removed the part about how hard it is to burn a corpse.....i could write a minimalist opera about that one.

DOWNLOAD from the midnight train to treblinka HERE!
Posted by Jonny Zchivago at 23:36

@ mandolinny (from preceding post)- I'm a musician and designer of "boutique" music effects and electronics, among countless other things (coffee roaster, dog trainer, stone mason, and occasional freelance writer—reviews and liner notes, mostly, as everyone with philosophy degrees winds up doing (NOTE to Jonny: I attended unit on obscenely generous full-ride scholarships—I ain’t no Penny Rimbaud! I just test good and come from appropriate adversity. In fact, being a student was literally the best paying job I’ve ever had.)). If you were around AS220 in the 90's, you may recall the Eyesores, which evolved out of the Amoebic Ensemble? I was, for a time, a member—I was fired for being “difficult.” Other projects have been well received by critics, strangely, and certain audiences, but I lack the business acumen and charm of Lee Hazlewood to ever make respectable coin. Consequently, I have a real weakness for those whose lives took rather stark downward spirals, owing more, perhaps, to their just being plain weird, rather than their uncompromising approaches—you know, the Nicos, Delia Derbyshires, Faheys, and Robert Calverts of the world. It’s all very familiar.

And you? You must be in some musically related field—the Sorrel Hays catch was brilliant. I still find myself obsessing over H. Cowell’s ruminations on sub-harmonics in “New Musical Resources,” even though they’re scientifically bogus.

Whether it's holocaust denial, capital punishment, torture, anti-abortion... When there are countless strong arguments against something, relying upon fallacious reasoning and specious argumentation simply to throw _another_ reason onto the pile isn't helping anyone. For instance, Heidegger was a Nazi--there ain't no question about that. However, that oft-cited passage from "What is Metaphysics?" in which Heidegger simply describes the thoroughly mechanical and industrialized processes of the camps is just plain _accurate_. Sure, it's cold, it's inhuman, but that's what it was. Victor Farias actually argued that simply reading Heidegger and embracing some of his arguments can turn one into a Nazi. That's just kooky.

On a related note, my roommate and I went to see Mike Dukakis, 1988 Democratic candidate for president, once. We walked right up to him and were literally within arm's length--no security, no nothing. Afterwards, I remarked how easily I could have just shot the guy. I wasn't _going_ to, I was simply observing that I _could_ have. Roomie thought that was really strange. Of course, I'd only met my roommate a week prior, so... Anyways, he was also poor--the uni actually roomed poor kids with other poor kids: weird, but it makes a lot of sense, in retrospect--so he moved past it, as we had other battles to wage. And he soon learned that I always say whatever comes into my head, regardless.

I was trying to tie all that in with the "massaging the facts and figures" bit. Not sure if I succeeded.

the second i see that name........kronos quartet....i imagine hands wringing and teardrops flying everywhere. It's probably unfair of me......but it's making it hard for me to download a work I so desperately want to hear. Hopefully the nazi tie-in will get me past the download link....

I once had a crap job in a cloakroom working alongside a bunch of Goldsmith's music students. I made the mistake of engaging them in a conversation about music. I told them I enjoyed listening to Boulez, Nono, Maderna, Xenakis and Stockhausen. The response? "Don't listen to that shit, listen to John Adams." 20 years later, the poundshop Donald Trump is PM and we are crashing out of the EU in under 10 days. But the cultural groundwork for national self-destruction was underway decades ago.

Oh fucking hell....music students! What an oxymoron that phrase is?
These bastards ,the ones who sing rule brittania and land of no hope and glory holes at the fucking proms, deserve self_destruction,in fact i like to destruct the cunts. Fuck Adams, gimmie Moondog anyday.

I can do without the Metheny, but Kronos are great. They performed a previously unperformed Feldman piece once--yeah, I'm back to Morty!--that ran like 10 or 12 hours. For some (most?) listeners, it'd likely be more boring than sitting through the entirety of Satie's Vexations, but for the rest, it's like hearing Scott Walker sing(?) "Do I hear 21, 21, 21?" for all eternity.

Kronos' Trains is a terrific piece. No idea why it was paired with Metheney. I saw them perform it live several years ago. It's so complex they needed to used a backing tape which resulted in old school classical music lovers in the audience booing the, Unfathomanble!

There's nothing i've encountered more hostile to people like us than an old skool classical crowd! I made the mistake of going to some classical concerts, and the looks of pure hate in our direction were unbelieveable.Loud Shhhh's, vicious requests to keep quiet, the lot. Even threats of physical violence....might have helped if we weren't drunk maybe,or one of our group laughing uncontrolably during the quiet passages.
These fossils are irrelevant anyway...mozart etc would have been on our side.

im gonna have to be the contrarian......i like the metheny side better! remember he did that solo noise lp...Zero Tolerance for Silence, and something with ornette coleman......song x. so he's not all plastic and donuts...and i'm sorry, but kronos sound overwrought even when performing these relatively sterile compositions...regardless, thanks for the great post