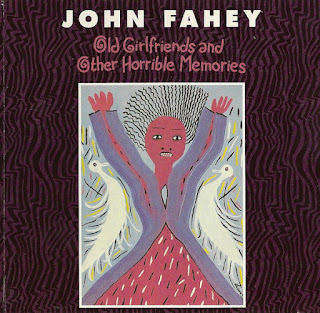 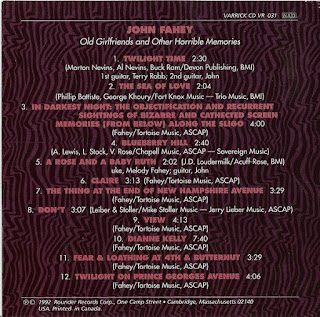 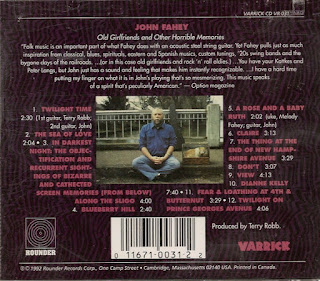 As it says in the cover notes of this John Fahey release from the nineties, "I have a hard time putting my finger on what makes john's playing so mesmerising"? I do too,for different reasons,but at least he had a gift for releasing albums with amusing titles,such as this one, which most of us male stereotypes can identify with.
It also says in the notes that this music speaks of a spirit that is peculiarly American.This i agree with, although thats not something to boast about in these particularly peculiar times!
Good album title though?
One day Donald Trump will also just be just a horrible memory,like those ex-girlfriends.Unless he brings about the end of history,which is looking increasingly likely at the time of publication!? (for future reference, if there is a future, The Trump administration has just assasinated a top Iranian General along with some dodgites from the Iraqi militia,and are threatening more!?)

DOWNLOAD before the end of time as we know it HERE!
Posted by Jonny Zchivago at 08:46

I’m glad those sleeve notes didn’t piss up off too much because, um, I wrote ‘em, not that I knew it at the time tho’. From the mid 80s the the mid 90s I wrote reviews for Option. Not like they paid me or anything, but I still thought it was a pretty sweet deal in that every couple of months I’d get a mailer with around a half dozen or so items to review and a deadline. In spite of what people whine when they don’t like a review, I did sit and listen to everything I reviewed, more than once too, with a notepad, scribbling down what I thought. I’d also listened one more time while I was typing to make sure I still felt the same way. The label that released this album chopped that bit from a review I wrote of Fahey’s previous album, God, Time and Causality. The reference to old girlfriends was theirs. He did have a way with titles You can imagine how much I LOVE Beyonce’, but if she released something called The Dance of Death and Other Plantation Favorites, well damn, I’d have to give that a listen.

The America I was thinking about was more a myth or an aspiration than a reality, Although greed and hypocrisy is a well documented part of history, maddeningly, there are wisps of freedom, equality and that old favorite equal justice laced in with the more heinous traditions. As for trump, unfortunately he’s a horrible present. I hope we survive for it to be horrible memory one day. The current debacle is just the kind of thing I expected, bumbling the country into a war with his thumb up his arse proclaiming how wonderful he was. As for the Iranians, since the US overthrew their government in the early fifties, it’s the sort of thing they’ve probably come to expect as well.

Heheh!...who'd have credited it? You wrote those sleeve notes,however indirectly.Small planet innit?Nice one.
I've only managed two sleeve note jobs so far, The Vacants LP, and some comp called something like UK Electronic underground vol 2, which i'm not too sure if its come out or not yet...but they paid up amazingly!...Jackdaw With Crowbar paraphrased me once i recall.

The art of the album/book/painting title is always a facinating part of popular culture, like naming a band. I usually put album title and artwork above the actual music before i buy......or if the band name is too dull, i'm not interested. So intheory, if Beyoncé had made an album called " Those Fucking Cunts Treat Us Like Pricks" instead of Flux of Pink Indians I would buy it regardless of the twerk-fest that awaits me inside.

As for the horrible present,i've kinda giving up being well-informed,and hope one day to wake up from this nightmare to find that it was all just a tasteless joke. if a nuclear missle was heading in my direction i'd rather not know.

CosmeaGardens said...
This comment has been removed by a blog administrator.
8 January 2020 at 13:25

I think that America does exist to some degree, at least amongst the lumpenproles and other outsiders--those who are well aware that notions like "meritocracy" and such are utter and complete bullshit. Or, take the rightwing nutjob who asks "if you got a job, or are you on benefits?" Pffft. In the US, who the hell gets benefits? I'm technically disabled (comically epileptic) and I haven't even had access to health care for most of my life. The "peculiarly American" quality is, of course, elusive and indefinable blah blah, but were I to give it a shot, I'd say that Fahey celebrated those who endured adversity. Moreover, Fahey had the decency to cop to the stupidity of his own adolescent racism (he wouldn't even listen to "black music"). There's an interview somewhere (probably The Wire, heh) in which Fahey mocks the notion that enduring hardship necessarily builds character--maybe it does, maybe it doesn't. Doesn't really matter so much as just simply acknowledging that it exists, on a massive scale, and especially in the most affluent nation in the world where it's so stupidly unnecessary.