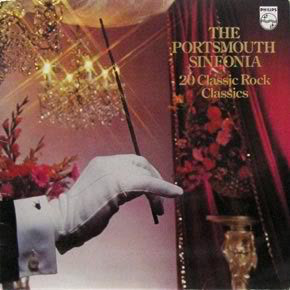 Released in the same year as Throbbing Gristle's "20 Jazz Funk Greats", the Gavin Bryars and Brian Eno-less Portsmouth Sinfonia's "20 Classic Rock Classics" probably had the same result, as in luring the wrong kind of person to buy this uncomfortable music by mistake.
Whereas the Jazz Funk enthusiast would have been appalled at Throbbing Gristle's challenging non-musick, the  average easy listening punter was certainly more likely to accept 20 Classic Rock Classics as just the badly  played real thing.
I'm sure you are now familiar with the original concept of mixing musicians with non-musicians playing instruments they were unfamiliar with;A noble attempt to free music up for the masses & get to the heart of popular composition.
Whereas the first two albums,which focused on Classical music, were far more upbeat and joyful,this one,lacking the guidence of originator Gavin Bryars,and the cred of Brian Eno (who no doubt had better things to do by 1979?),they come across a little melancholic and dismal sounding, like a bad community band unfortunately captured on record whilst the air is let out of them.
It lacks that atonality,and the joke wears rather thin by the time we get to the best track,the Stones' "Satisfaction".
Nonetheless, this gives the rock and pop dinosaurs,not so much a kick,but a mild slap of the testicles.Truly in keeping with the Punk era's intended Raison d'Etre.
Its like an almost capable school orchestra playing James Last,but without that famous James Last,ist funky ja, rhythm section.
Somewhat disappointing.

1.Pinball Wizard
2.Apache
3.Leader Of The Pack
4.A Whiter Shade Of Pale
5.You Really Got Me
6.Uptown Top Ranking
7.Glad All Over
8.Heartbreak Hotel
9.Telstar