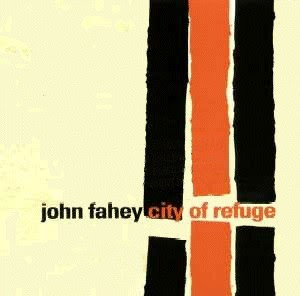 No, I don't mind all that plinky-plonky finger pickin' folk nonsense if its mixed up with some noise and dark ambient fuzz.In fact, this is how all that american primitive stuff should sound.Gimmie the tapes of "Blind Joe Death" and lemme remix it......in fact you don't need the tapes as there ain't no rubbish to back up the solo guitaring......I might give that a go during my autumn years.It would sound not unlike this album,but maybe a bit more harsh noise floating to the surface every five minutes or so.
So the 'Godfather of New Age" ,as some deaf person labelled him once upon a time, muat have scanned The Wire magazine after he was re-discovered by some desperate music journalista.For Around '95, 'The Glitch', was heavily lauded by those in the 'Know', so maybe John was just giving the kids what he thought they wanted? Trouble was,those who read the Wire were not young, and were primarily White,White Collar music bores,who slip on some Albert Ayler in the background whenever the phone rings. Or pretentious arty-wannbe cunts like me.Luckily as I dragged myself up from the gutter of council estate thatcherite Britain, I would never be accepted in either group. This 'Freedom' gives me the perspective needed to actually appreciate this fine record in its true light.
And as for the Godfather of New Age, he sums up his feelings nicely in the title and music of Track 7.
.....we'll forgive him for sampling Stereolab, who are firmly entrenched in the 'pretentious arty-wannbe cunt' category.

DOWNLOAD and disembowel the new age HERE!
Posted by Jonny Zchivago at 08:38

We are all pretentious arty-wannbe cunts.

Fahey was notorious for dissing his early material. Glenn Jones wanted to work with him on a collection of his earliest stuff on Fonotone from the 50s. John wanted nothing to do with it and told Jones he wanted $10,000 or they’d have to wait until after he was dead. That said, I could see him being more interested in Jonny’s idea of chopping that stuff up and mixing it with static. Truth be told, I always appreciated Fahey’s work, early or late, What I didn’t like was dealing with the doting hippie-folkie types you’d encounter back in the day. He really detested worshipers. For me, that was one of his more endearing qualities. Most of that congregation absolutely HATED this album. I thought it was the best thing he’d done in years. That last track sounds like cathartic rejection of all the noxious ‘praise’ people were trying to slather him with. The title still sounds like a good idea.

@ Unknown C, I concede your point.

C, how dare you suggest my pretentious artiness is something common amongst mankind,or as I like to think, My children.

As I've always said, everybody loves pussy. Nobody likes a dick.

From a purely heterosexual male viewpoint this is correct.

Since it looks like we’re on the slow train out of Faheyvile, I thought I’d toss my two cents into the ‘got it immediately/layers of the onion’ thread a few posts back. I was in the former camp, tho’ I had no interest in folk, blues or solo acoustic guitar and didn't seek Fahey out. A few weeks before Christmas one year, a woman came into the record store I worked in looking for Christmas music. The store manager was going through the bins making suggestions and gave me an album to play for the lady. It was Christmas w/ John Fahey, Vol.2. Looking over the back cover, side 1 looked like the usual fare. Side two was a side long piece called Christmas Fantasy. As was my wont, I put on side 2. It was dark, brooding and sounded nothing like Christmas music. No surprisingly, the lady passed, but I snapped the bastard up and never looked back. Since Fahey enjoyed fucking with people’s expectations, it seems fitting to post this album at the most unpopular time of year for this sort of thing; after everyone’s been inundated with Christmas music to the point of nausea:

Thanks for giving me the opportunity to check out the later Fahey, and confirm that like the early Fahey, it is utter fucking drivel, though of a different flabour to the earlier drivel.