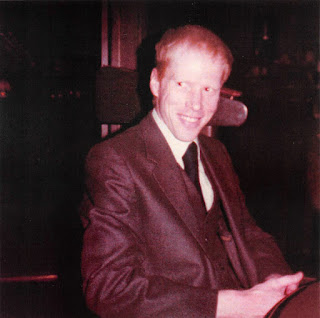 The second Jandek album called "Austin Sunday",so the suffix, 2007, is added to ease the confusion.Which is something I'm not sure is needed when it comes to Jandek fans.We need more confusion please,and you can certainly count on the representative himself to deliver it.
This is back to the classic live era Jandek with unknown backing band style. Rambling unsyncopated atonal improvisation, with meandering time signatures.Sounding like four strangers who have never met before the start of the concert,playing instruments they aren't familiar with.
Now we await more new Jandek in 2020.His many other albums are ALL on this blog.....just click on the Jandek Label to reveal the seemingly endless treasures on offer.

DOWNLOAD some austin power HERE!
Posted by Jonny Zchivago at 20:55

Jonny many blessing to you for all the Jandek

Still on the painkillers, not feeling too good really... I need some relief! and here it is! Thanks very much, Milly's Grandad.

Well make the most of jandek relief, because that's it until he releases an new album. I suppose there's a back catalog of around one hundred albums to choose from which may help?

Many thanks for the flood of new Jandek. Great listening for a new year.

I was one of the lucky ones (depending on your perspective) who were able to see Jandek in 2007 in Austin as part of the SXSW festival, & it was my first exposure to him, on recommendation of a friend whose tastes align with mine about 99%. Recently, I have been trying to absorb as much as possible from the mystery man's ouvre & your blog has been a real treasure trove. Thank you times a thousand for all of the hard work you put in so a stranger could stumble on it & find a veritable mountain of his recordings just waiting to be discovered.

Not yet got any 2020 Jandek,but will be posting them later in the year....give him a chance to sell some first eh?

If you're here...you're tripping.
But, your lucid moment has reveal a major faux pas on my part!!!
It is,unforgivably...MISSING!?.....I will have to rectify this.Even though I 'll get to be called a 'Scumbag' again by that sad Jandek superfan,whose name I have understandably forgot.