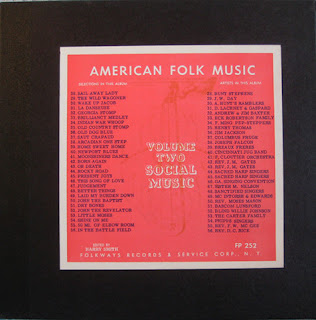 This is the creepiest of the three anthology volumes.
Its like stumbling over the rehearsals for Rosemarys Baby in a near-by copse,except that its for real, and no mere rehearsal.
Just imagine stumbling over a child sacrifice in a clearing on Walton's Mountain, and recording it.Thats basically what Harry Smith did.It got dat Voodoo.
Hillbillies frighten the living shite out of me,in the same way that Islamic fundamentalists do.They are part of the American Taliban,and in their simple ways exude the very essence of Stupid,but a loveable brand of Stupid.
Just imagine their toothless grins as they stomp merrily on their shack's front porch,pickled on Moonshine whiskey, burning crosses and berating Abe Lincoln.
Why they would want to slag down the memory of President Lincoln for, I dunno.They had so much in common after all?

“I will say then that I am not, nor ever have been in favor of bringing about in anyway the social and political equality of the white and black races – that I am not nor ever have been in favor of making voters or jurors of negroes, nor of qualifying them to hold office, nor to intermarry with white people; and I will say in addition to this that there is a physical difference between the white and black races which I believe will forever forbid the two races living together on terms of social and political equality. And inasmuch as they cannot so live, while they do remain together there must be the position of superior and inferior, and I as much as any other man am in favor of having the superior position assigned to the white race. I say upon this occasion I do not perceive that because the white man is to have the superior position the negro should be denied everything.”

(*) missing track(s) from the file...click to download separatly,or just play the mp3 see if this is your bag or not?

Some spine tinglers on here. Thanks a bunch Johnny Z

I always wondered how Harry Smith, the Lomaxes, et al made it out alive. But yeah, besides religious fundamentalists, the American hillbillies are amongst the creepiest/scariest peoples in the world. My former band toured with a Finnish band some years ago, one of whom was weirdly obsessed by Southern rock--more redneck than hillbilly, but a lot of commonalities. He also seemed strangely oblivious or indifferent to some of the, erm, darker aspects. Anyways, I thought that a tour of some of these places might change his perspective a bit, but it seemed to have no effect. Still bugs me.

Also, you seem kind of obsessed with The Waltons--what's the deal?

And here's the Fahey Zabriskie Point sessions I forgot to link:

“Honest Abe” Lincoln wasn't the 'woke' progressive people might think he was. In fact, he was in favor of exile blacks to South America. I guess "...I do not perceive that because the white man is to have the superior position, the negro should be denied everything.” is something of a step in a right direction, given the withering racism all around at the time. It's not much better today. Once I would have said at least it's no longer federally sanctioned policy, but given the last US election, white 'supremacy' it obviously alive and quite robust. Funny, I find that point of view the lowest, most primitive attribute of american society. Nice one honkies!

Whats the deal with the Waltons?
Aren't all americans like that?
Just like all us English gentlemen all live a life similar to Downton Abbey crossed with a splash of Peaky Blinders.
I just enjoy reading between the lines of the Waltons, the secret child abuse,the wife beating, the disabled results of inbreeding, and,of course, the racism.

Amazon not prevent download....try more than once, twice usually does it!

Finnish people have ocassional lapses in judgement.like allying with Nazi Germany,thinking that death metal is cool, and stuff. But we love 'em for it?

The Uk record on racism is even more insidious, the empire of 'good' intentions etc, and ,like france,has its own kind of hill billy, in the industrial deserts of northern england,and in the agricultural wastelands of the french south.....they seem to think that something has been stolen from them.....fuckers all!

Yes, there is truly more we have in common than seperates us. Lucky us...

Hi Anon,
yep they're missing.It can get quite confusing with all these volumes,and discs,some escape getting compressed.
I'll upload them and make a link using the track titles as they are on the tracklist on the post....just click on them and download 'em.They should take their rightful place alongside the other tracks in your file.
Enjoy.