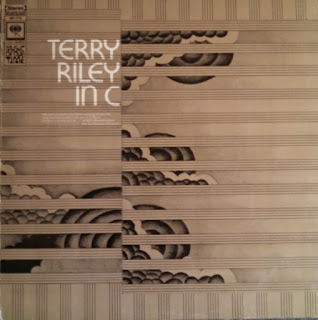 With a name like a North Yorkshire mechanic, Terry Riley, otherwise known as,'The Godfather of Minimalism" ,it was inevitable that he would slip down the minimalism pecking order behind the more exoticly named Steve Reich, and Philip Glass;but, he was certainly there at the year zero of  repetitive structures alongside his californian chum, LaMonte Young.....which one was the actual 'Godfather of Minimalism' is up for conjecture,but i'm in the LaMonte court.Both were disciples of Indian classical vocalist Pandit Pran Nath,and both moved to New York around the same time."In C"is often cited as the first minimalist composition,though La Monte Young's drone compositions preceded it by several years....but,as for repetitive rythmic minimalism,with 1964 scribbled on his CV, he's in with a shout.Although it was Steve Reich introduced the idea of a rhythmic pulse to Riley, who accepted it thirstily, thus radically altering the original "In C" composition,which had no rhythm.....just like yer average white man.
Riley quickly slipped into the hippie meditation music genre,grew his hair and beard,and was responsible for many of these unwashed future wall street wolves, sitting cross legged in the lotus position for hours,only getting up to turn "In C" over to side two every half an hour or so.
If you listen to the 1964/1970 version of "In C", there's very little minimalism in it so far as instrumentation is concerned, and even gets a bit James Last towards the end, with some  groovy silver-haired Discothéque bass playing that the master of 'easy' would have killed for.Going on to conclude that never completed Minimalist Medley he was working on before his death!
Written in 1964, it says here,but It wasn't until 1968 that Riley began to sound like the work that Steve Reich would become famous for.Then he started dabbling with underground pop stardom, and hanging out with Cale,Bowie, Fripp and Eno. That kind of behaviour rightly demoted him to the semi-serious composer ranks,leaving the chin-stroking spoils for Glass and Reich to reap.
At least he was one of the few of the LaMonte Young crew that wasn't in the Velvet Underground at some point.Lucky escape.

DOWNLOAD by pressing the key of enter on your keyboard HERE!
Posted by Jonny Zchivago at 11:10

The most minimal piece I know had two notes in it: a B and the F# above it, and above them the little bird's-eye symbol that composers use to represent "hold." I've forgotten the title-- something appropriately minimal like "Sustain Piece"-- but Terry Riley was the composer. I encountered it at an art space in Providence, Rhode Island: there was a photocopy of the score, and a cheap Casio with the two notes in question being held down by C clamps.

I like this piece a lot. It's "minimal" in the sense that it can be represented in a page or two of dots, but it has a richness to it not only in that it gives the performers a boatload of freedom within those 53 measures, but that as those measures progress, they prescribe half a dozen episodes within the piece of distinct rhythmic and harmonic textures-- as you can see if you pick up the needle on this record and drop it elsewhere. I got a "residency" (no money changed hands, but I got to use an important art space) to do this once with a bunch of friends from the local free jazz and noise communities, and initially the jazzers thought it was dumb, but once they heard the variations, they got really into it. And then we played "Here Come the Warm Jets" as an encore.

(Then we added Roger Miller from Mission of Burma and did it again at a major rock club. That was big fun! Miller played a toy piano.)

Yeah, its one of those pieces that's easy to do,and is a popular modern composition piece that can be fucked over by Rock type bands....i remember the Stryrenes did a long version,and i have one by The Acid Mothers Temple,who also had the cheek to do an "In D" and an "In E" too. I fact I may have a go.
I like the idea of Here Come The Warm Jets as an encore.
The other popular and inclusive piece for rock groups is the ambient noise misterwerk "4:33".....as for one note compositions, theres several Tony Conrad works, and Rhys Chatham's "Guitar Trio".....my band, "Scouts Of Uzbekistan did actually do a version of that one....i think some kind person put that on YouTube?

Ligeti's Ricercata is in twelve movements--the first being a single tone (across the piano), with one added with each successive movement. Unlike Riley's "In C" and others, it is actually extremely difficult to play however. Not a "sonoristic" piece, strictly speaking, but it's got a lot in common with that stuff--basically, what Rothko's multiforms would sound like if they were... sound.

@mandolinny -- Where in Providence, and when? I _might_ have had some part in that, but I don't remember.

If memory serves (not always a given at my age), the art space in Providence was called AS-220, run by a guy named Umberto Crenca. I think it existed for a couple decades, from the late 1970s into the '90s, maybe longer; I lost touch. It didn't always have the same address-- moved around as bigger spaces opened up and more grant money became available.

When we played In C we tried *not* to do it as a rock-type band, but more like the forces on this recording. So, for instance, there was a drummer playing full kit on "Warm Jets," but marimba for In C. I played mandolin for In C (generally inaudible on my cassette) and electric bass on the Eno. We had several saxophones of various sizes, a clarinet, a trumpet, a bigger brass (euphonium?), a couple keyboards-- eleven people all told, from three different bands, none of them normal.

Yeah, I worked at AS220 in the early 2000's and performed there countless times from the mid-90's through the 2000's. It's still around, though I haven't been in years. Anyhow, we did it somewhere else in Providence--probably early 2000's. Can't remember the name of the place, if it even had one--my own place (an old mill building, of course) was also occasionally used as a performance space--The Palaz of Hoon.

Of the zillion or so versions out there, this one makes the most sense to me. It seems the most natural, least contrived anyway.
https://www.youtube.com/watch?v=_FXQ68ZkWVw&t=60s