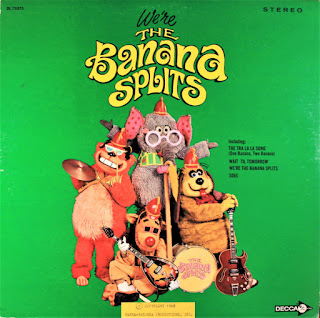 Yeah, I used to think that The Banana Splits were The Residents before they became The Residents.
I now suspect that isn't true, but film of the Splits driving around the sandy beaches of California in Dune Buggies, and the cult-like nature of the Banana Splits House suggests they had a lot in common with everyone's least favourite Cult leader, Charlie Manson?
Is this the answer to the greatest mystery ever to baffle mankind?Who were the persons unknown inside the Banana Splits costumes?....Charles Manson was Fleegle,Tex Watson was Bingo,Squeaky Fromme was Snork,and Steve 'Scramblehead' Grogan as Drooper...with Van Houten, Atkins, and Krenwinkel as the Three Musketeers....its all so clear to me now.
Of course The Banana Splits show was one of the great Psychsploitation masterpieces of the small screen's golden era.
Al Kooper, Barry White, Gene Pitney and many other C-list composers were lining up to palm off one of their weaker songs for our furry chums to psychedlize for the kids high on the bountiful E-numbers of sixties and Seventies confectionary.
I, was one of these poor kids,chomping down day-glo coloured bon-bons as I absorbed 'The Arabian Knights'along with various chemical preservatives and flavourings.I even had the nickname 'Zaazoom', after the violent donkey in that very segment.One had a terrible temper that if triggered would transform me into a mini whirlwind of flailing fists and kicks.I put it down to unresolved feelings of rejection by my parents,as I was one of those unwanted late life children......i'm ok now, but don't call me Crazy or i'll smash yer face in!!
The music is classic fuzzed-up Psychedelic Pop with the Lysergic element well and truly wrung out.
However, when i first watched this stuff in the early seventies,the music seemed terminally unhip and naff.I wanted Glam Rock like Bolan Bowie and The Sweet, not this dated rubbish.TV executives have a lot in common with Christians in never getting it right when it comes to on the cusp music.Nearly always at least five years behind what the kids were listening to.We were still listening to easy Psych in 1977,via shows like this,Josie and the Pussycats and Scooby Doo......what was Fred wearing?
I never really noticed that Shaggy was a Hippie until i was an adult.The best Hippie on TV, however, was ,by far, Dylan the (apparently always stoned!?) Rabbit in The Magic Roundabout;which was, in turn the greatest piece of Psychedelic television of the whole seventies.
Anyway, i always wanted to be in the Splits rival gang, "The Sour Grapes Bunch"(which fits my personality perfectly?) rather than have Fleegal tell me what to do.That hippy Drooper can fuck off too!

DOWNLOAD some sour grapes HERE!
Posted by Jonny Zchivago at 19:55

Man, you crack me up!

Bizarre that there's an up and coming Banana Splits movie appearing at the same time as a movie on Manson, and coinciding with the anniversary of the Manson Killings!?...proof or what?

Proof you're a shill, maybe.

Being members of the cult must have affected the ‘actors’ in the suits. Apparently there was a road show planned and the people in the suits demanded a higher rate of pay, maintaining they were the talent who gave the suits the soul and personalities that made the show popular. Unfortunately Hanna-Barbera didn’t think so and fired them on the spot. I wonder if anyone noticed… I also once looked down on The Splits, but now in the Monkee tradition….I’M A BELIEVER. Seems like everyone wanted to contribute groovy sure fire hit songs, to both “bands”, for pay of course. There’s a long line of hew-man maina, isn’t there? Mathew-Mark-Luke and John, John-Paul-George and Ringo, Bingo-Fleegle-Drooper and Snork, Charlie-Sqeaky-Pooh Bear and Tex.

Hey evrybody which one is Your favourite Manson Family member?...lets have fun! (giggle)

The Banana Splits who wore the costumes didn't do the voices. So there were actually eight of them...

Favourite Family member? Would anyone have dared not to say Charlie?

Indeed Philip....but,did the persons who did the voices also provide the singing voices on the recordings?....so potentially there may be 12 of them....not including the four that got sacked,so we're lookig at approx 16 Banana Splits at large!?

Fav Family member,and i can say this now that Charlie is dead, has to be Squeaky,if only for the assasination attempt on Gerald Ford, without a bullet in the chamber of the gun......and she's still under Charlies spell to this day......she needs to release a record i reckon?

Under the influence of a cadaver... sound familiar?!? I guess I'd vote for Squeaky since she found a way to extend murderous rampage beyond the Family. Besides, she’s so cute!, in a homicidal kind of way. Char-lie must've been proud. Her life-long punishment is to be hounded by other believers and the assorted ghouls who pursue this kind of thing for their own sorted ends.

Cluster were a Situationist version of The Banana Splits, you know. I read that in The Wire once, so you know it's 100% accurate and true, and not just one of the stupidest fucking statements ever made by an actual human being.