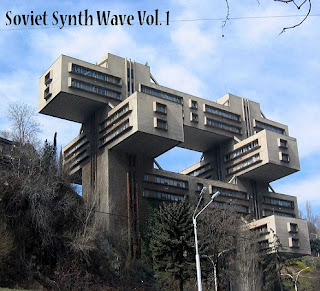 The Soviet approach to making pop music was very similar to their apprach to architecture,as featured on the accompanying photo with this compilation. Brutal,formulaic,structually unsound ,with humans reduced to nothing more than an after-thought. There are no Yazoo's, Pet Shop Boys,or Gary Numanski's on here, just a jumble sale of imported music tech let loose in the hands of young(the 35-45 demographic) socialists with little or no idea of how to write a catchy tune......sounds good huh?
This all sounds like a whole music culture based on catching a brief snippit from a western radio transmission of a post Vince Clark Depeche Mode tune,merged with a three second snatch of a Classix Nouveaux track.
However, the Mumii Troll track is a urainium tipped classic.
Yep, leave the timeless electro-pop hits to those pale eye-liner wearing English Kids, and leave the Russians to do what they do best.....clearing a room.

DOWNLOAD these dancefloor emptiers HERE!
Posted by Jonny Zchivago at 23:14

If Soviet synth wave is anything like their brutalist architecture I have a lot to look forward to.

Killed by Italian snippet!
Thanks.

Indeed Komrade, and don't forget,Communism is the only way that human civilisation, and the planet can be saved from ourselves.As long as it has a cool soundtrack that is...if not the humans can go fuck themselves.

You are not well versed in Soviet music , write to me notandante@yandex.ru . I will help you.

Nah mr Anonymouski, right now i want nuffink to do with anything or anyone Russian....you're probably not even human but some kind of sinister anti-world Hackbot designed to erase my computer memory.....if you get to change yer government,then maybe i'd let you 'Help' me...but i'm fine with my understanding or misunderstanding of Soviet music.
Hope you escape the draft,
and Good Luck.

You talk like a schizophrenic.
If you don't believe that I'm human, tell me where you can write.
And Soviet music and Russian are not the same thing.
You are a hypocrite and what you declare on the blog is a lie.
And it’s ridiculous to talk about the government for those who completely capitulated to Hitler)

Typical KGB answer.
And what exactly have i declared on the blog?
I'm very aware of the difference between Russian and Soviet,and i don't need it explaining from anyone who capitulated to Putin.When are your call-up papers arriving? Change your govt.

You are a schizophrenic and hypocrite.
take the RED))) pill and write me or takе blue pill be slave niger-fascist.
I didn't vote for Putin.
Auf Wiedersehen "mon amiе".

Just by taking part you voted for Putin you silly boy.
Hypocrite?...moi?..'twas not me who used the word Nigger and fascist in the same sentence.
Get a sense of humour fool.

"Anonymous" = troll/bot, no? So nothing warranting of a response, but i could listen to him/it for hours so please, continue…

Mate, I've been in Australia since I was 11 and I feel ashamed of what's happening and about what Russia is doing in Ukraine. It beggars belief that someone who is actually in the country can just glibly say "Well, I didn't vote for Putin so I'm just responsible."

Everyone in Russia will be held responsible. Just like after World War 2 no one cared if you were a "good" German.

More humility and less chauvinistic nationalism/racism , tovarisch. Russia has a long road ahead of it before it will be accepted among civilised nations again. Prepare to beg for forgiveness from Ukrainians and all the nations which Russia has oppressed throughout history. It won't be pretty but it has to be done, if you have any decency in you.