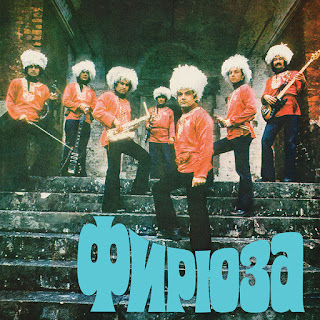 More from Funk capital of the USSR ,Ashkhabad,Turkmenistan. From the time before Life-President Saparmurat Niyazov took over and banned everything,but not before he renamed 'Bread' after his mother.I dunno if he tried to rename the David Gates soft rock combo 'Bread' also after his mummy,or tried to get his sister in on the act?
However,Firyuza was a Turkmenian ethnic/prog/jazz/fusion instrumental band, founded in 1979.They won the coverted first prize at The Sixth All-Union Entertainers Competition in Leningrad, thus gaining the privilege of an album release on distinctly ungroovy state label Melodiya.And its as good as their wild image on the front cover.Heavy on the use of the fiddle,it sounds not unlike a mixture of The Dirty Three,the Dirty Harry soundtrack, and the less dirty, Mahavishnu Orchestra.

I notice that Melodiya didn't release a second album,or maybe it was that they were imprisoned by Turkmenistan's de facto dictator and were never seen again?
Great Image, Great music.

A1. Ashkhabad
A2. "Kray Rodnoy" Native Land
B1. Chapycsuar
B2. "Dialog V Aule" Dialogue In The Village

Thanks for all the great shares! Much appreciated. Do you happen to have "Whipsmen - Sounds Of Discipline"? https://www.discogs.com/Whipsmen-Sounds-Of-Discipline/release/5268651