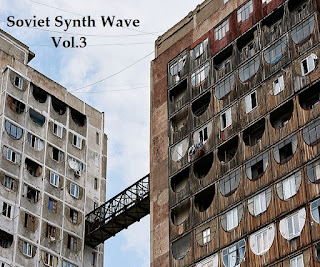 Having lived my young adulthood throughout the 1980's, and am now listening to the pain that my compatriots in the Soviet Union had to endure behind that silly ol' Iron Curtain thingy, I can now fully appreciate how fucking WEIRD pop music was between 1983 and 1989.
Of course at the time I hated all this shit,and could look down on it all because I liked Coil,Einsturzende Neubauten and The Birthday Party,....what a twat was I?
Secretly to myself, I thought that a Flock of Seagulls, Classix Nouveaux, Japan, Simple Minds and the like were rather marvellous. All this stuff sounded even more ridiculous in the 90's when 'real' drummers made a come back,and guitars were played properly again......how fucking boring was that shit? Especially that ridiculous Brit-Pop torture.
Well, you know how kids start listening to music via their parents record collections?.....it was jaw dropping to hear teenagers playing 80's Futurist pop in the early 2000's. It all goes round in circles they say....well they're correct....whoever 'they' are,but 'they' are apparently genius's.,or geni?
Like Punk never happened 'They' said, but this stuff was a direct result of the 'Punk' ethic.....in other words it was 'Punk',but weirder.
Amid the massive gated snares, Simmons electronic kits, digital synthesis,cavernous reverbs,warbley vocals and fretless basses lay something beyond normal comprehension,something genuinely weird....how did it come to this.How did Kajagoogoo happen?
Luckily for any English speaker,listening to this Soviet Wave stuff,the truly terrible lyrics that came with the package are incomprehensible.Something that made the Western Futurists harder to listen to or take seriously.
Simon Le Bon being the new romantic laureat of terrible poetry......"You're just about as easy as a Nuclear War" said the Bard of Brum.
Its no coincidence that Duran Duran were formed not too far from the birthplace of William Shakespeare, the worlds most famous West Midlander,followed by the next most famous West midlanders,Duran Duran;just pipping Black Sabbath,Slade,and half of Led Zeppelin for second place.
Yep,prepare yourself, Duran's debut album was a truly great record!?

DOWNLOAD the alternative future of the ussr HERE!
Posted by Jonny Zchivago at 07:49

Totally shit. There is no such thing as soviet synth wave. There were no synths at all. All soviet industry could make sounded like 60s hammond or 50s GDR's Ionika. All keyboards in the ussr used to be called Ionikas, btw. And it seemed to me back then that they all got one drum machine for the whole soviet union, it was something like TR-707 whose sound I hate since.
This bunch of crap should be called whatever but the "Soviet Synth Wave"

OOOOh who rattled your cage?
There were plenty of western synths in the CCCP. Eg that massive EMS synth that Artimiev used and was loaned out. DX 7's were popular. etc.
Sense of humour over-ride in operation it seems. I called it Soviet Synth wave in an ironic sense.....pray tell me,what,in your informed opinion isn't crap?...we're all interested....not.

Thanks!
I Really dig this stuff!