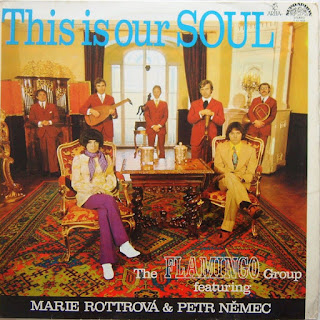 HaHaHaHaaaaaa, you americans think you invented Soul music don't you? Like captured Nazi's got you to the moon (or not as is suggested in certain quarters?), and West African slaves invented the blues and therefore your beloved Rock and the Rollings! You stole your culture,whereas we in the glorious soviet empire  created very funky soul music for our comrades to sit still and listen attentively to under strict anti-subversion laws. In 1968 we Russians,the KGB specifically, brought in this secret Soul music to stop the violent unhappiness that was spreading amongst our brothers and sisters in the Socialist Republik of Czechoslavakia. Our glorious Tanks forced them to enjoy life and tap their feet to the God mother of Soul and hero of the revolution, Marie Rottrová.

Phew!.....i'm back in the room now.Its taken me weeks of being in character to achieve this concise explanation as to why Soul was gifted to the world by white eastern europeans.
This album has to have the greatest title of any album ever released or what? I challenge yee!

Not to be confused with underground prog subversives 'Flemengo',whose Ivan Khunt rivals this album title as the funnist thing from eastern europe since 'Ausfhart' autobahn signs.'Flamingo' were the soviet bloc's 'Official' Soul and Funk group; and Colonel Marie Rottrová & Field Marshall Petr Němec were ordered to be their Aretha Franklin and Otis Reddingski of communist Soul.
As a frequent visitor to Leicester's progressive music shop "Ultima Thule", I stumbled upon this classic in the sale rack for 50p......which was expensive for Ultima Thule, as the sale rack frequently had 'Free' albums stored there,as long as one purchased something else however. This was a straight no-catches 50p, the same price I paid for my first David Essex single("Rock On")!
Easily my best purchase from Ultima Thule, eclipsing any obscure Agitation Free offering, blowing  Urban Sax back to where they came from.....up their own Our Soul's.However that Dave Pike Set album ran The Flamingo Group pretty close, but the breaks on "Our Soul" were superior,and the Cheese factor was monolithic.
I did spend most of the 90's looking for breaks to sample and searching out the silliest easy listening tripe I could find.....this was my second wave of Punk as far as I was concerned.
Not a fan of Soul music in general,with the genre's vocalist busting a bloodvessel to convey some simplistic emotional nonsense about their 'Babies' having left them and shit! Does my head in!Get over it and calm the fuck down for christs sake!?
Marie Rottrová & Petr Němec's voices are, not to put a finer point on it,fucking terrible! Like they're having their tonsils sanded down by some No.5 glasspaper.....ear-defenders recommended. The music is fabulous, James Last-lite approximations of what Funky Soul isn't.Ending with the elevator organ work-out of "Quasimodo's Dream"...whatever the Hunchback of Notre Dame would have dreamt about is open to conjecture......some corrective surgery perhaps,or Ezmarelda's naked butt cheeks;she only gave him some water! Talk about misreading the signals.
My father, in his later Alzheimers-onset years, used to refer to my mother,unaffectionatly, as Quasimodo, as she had developed a Charles Lawton style stoop due to her debilitating Parkinson's syndrome.....don't judge him, he was old skool. So her dream would have been that I euthanize her,which she asked me to do on several occasions. Being shit scared of Prison, and having to go to my, previously discussed, 'Arse-Rape Place' frequently if convicted.I, reluctantly,didn't fulfill her wishes.
Ten loooooong painful soul-crushing years later, she eventually wasted away to resemble a shrunken little dolly,and died.....alone!
Dunno how I got onto this sad subject,but to rub salt in the wounds the UK Government made them sell their house to pay for their 'care?'.....which should have been renamed 'Don't Care'.So much for the National Health Service!?....so not only did the government condemn both my parents to a depressing and harrowing end,they stole their money and my inheritence!
So to end this rant about how the UK Government treats war-heroes like my parents, can I urge all Brits reading this to vote out the Tory Scum in this joke of an election,or live with the consequences of a Donald Trump brokered America first 'Trade Deal'(NHS on the table), encouraged by KGB traitor Vlad Putin.....who definitely was NOT responsible for the genius of The Flamingo Group!

(The Sound of Heavy Breathing)

DOWNLOAD this HERE you arseholes!
Posted by Jonny Zchivago at 12:01

How about this new theory? America did go to the moon, just not the first time. They weren't quite ready but needed to win the space race, so they faked the first one July 20, 1969. This gave them time to continue getting ready to do it proper on Nov 19, 1969. Maybe they faked the first two, because the third wasn't till Feb 5, 1971. This was the one where Alan Shepard hit two golf balls, a harder thing to fake. I tend to not believe the conspiracy, but this would help explain why those first astronauts are so tight-lipped, PTSD and angry about their experience.

Hummmmmm...I like IT!
Maybe the golf ball thing was the real achievemnt and they had perfected CGI decades before we were bored shitless by its fakery.Under the military secrecy rules CGI was so advanced in US govt research facilities that under the fifty year rule it will be released to the public only after half a century? As its still far superior to those video games we call Netflix series. Just like the British Secret Service invented the Digital Computer (Colossus) in the second world war, and nobody let the info slip until the late nineties.So the geezer who thought he had 'invented' it in the 60's was well pissed off.....so i'm now going for all moon landings faked.They tried it for real, but the landing module crashed killing Armstrong and Aldrin, who were replaced by actors.....thats why they couldn't improvise a script when they were questioned.

2nd only to this lp title is "sit still and listen" which I stole from this very post.

Additional Parkinson's comedy: I have a photo of my dad lying in hospital bed sieg heiling my mother because she asked him to do something impossible...I'm guessing along the lines of "honey, eat some dinner"....

My Father had Alzheimers, and my mother had Parkinsons(looks like i'm fucked then!?), imagine that combo together.They hated each other and were made to sit next to each other in the state recommended 'care' home. I don't even think they recognized each other.
When it got bad when he was still at his own place, i used to take him to the pub, buy him a pint of Stell Artois and he'd be back to normal for a few hours....then later he'd be trying to catch a bus with a shopping bag full of photographs at 4 am....so I have no photo's of my family history left.
My fathers war history can be spied upon here from my ahes scattering trip last september 2018
https://dieordiy2.blogspot.com/2018/09/various-artists-second-city-statik.html

In Fact i may steal "This Is Our Soul" from the flamingo group for my bass/drums duo 'Zog's nexr album,currently in the process of completion.