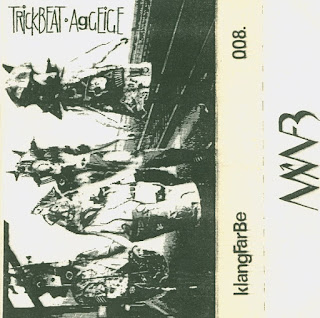 AG Geige's second cassette (get first here!) was actually,eventually, released on the DDR state label for such low brow popular musics such as this, Amiga. The signs were that the state was losing control with all this Glasnost and Perestroika nonsense.
There were several versions of this album,so the first 16 tracks come from the CD version released in 1990, and all the bonus tracks come from the original cassette release on KlangFarBe.
I dunno if the Stasi were keeping notes,so maybe the files at Stasi HQ could help with the track listing.
A fine album, or double album this is. An avant-abstract electronic rock post-punk collage of the highest proportions that should,in an ideal world, find its way into many a good boy or girls christmas stocking this yuletide. After all, Santa Claus is nothing more than a glorified member of the supernatural Stasi,with his sinister elves spying on our kids,taking notes as to who's been naughty and who's been nice.
Christmas was,after all invented in Germany,alongside Industrial Genocide,Methadone,Crystal Meth,National Socialism,protestant Christianity and,yes Indeed, the perfect Police State in the form of the DDR.They should be prooooouuuuuddddd!

Bonus Tracks:(not necessarily in this order)

It's interesting that they seem influenced by Der Plan, whose music was largely a dada parody of a culture based on commercialism & consumerism, using advertising jingle music etc. Der Plan were like the Anti-Kraftwerk, so I guess their music was okay with the powers that be on the other side of the wall.

I'm still wondering where the pissed off kraut got his baby dick sore from... I guess I'll never know. Ha ha.