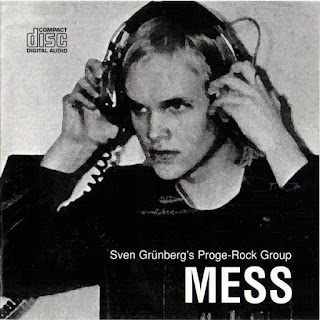 Sven Grünberg was in a Estonian progressive rock band called, ironically, Mess;which I hope was a piss-take of 'Yes'? This mess was founded by Sven and the splendidly named Härmo Härm in 1974.However, Despite the many years of the band's existence and many live performances, Mess didn't release a single studio album because of the contradictions of their musical style with Soviet ideology; only in 1995 did Grünberg manage to release a compilation from several surviving Mess recordings,of which makes up this CD,recorded from 1975-76.

I've always had a soft spot for bands that exist for decades yet never release any product, like Keiji Haino's the beyond excellent 'Fushitsusha',and the also excellent 'Mess'.
Mess's sound is a spaced-out experimental type of prog,thats a cross-hybrid between the more cosmic end of Krautrock and the darker,spacier, side of British progressive Rock.Further strengthening the Baltic states claim to be the home of Soviet music,where all the most interesting commie prog,or 'proge'(i'm sure that's a typo,but a good genre name nonetheless) bands came from.
Sven eventually got his 'professional' status which enabled him to get a record released on Melodiya under his own name,the soviet-kosmiche electronic classic, "Hingus".

DOWNLOAD this mess HERE!
Posted by Jonny Zchivago at 14:25

Sven does have a very determined look about him, driven in fact. Agreed, the inability or unwillingness to release product tends to bump a bands status up a knotch or two, regardless of what they sound like.

A very determined young man, very driven. I suppose one had to be in the USSR?

In the west as well I s'poze; look mean and busy or be trampled under foot.

As my father used to say, "if you can't fight,wear a big Hat"...advice i followed all my life.I've had vicious thugs giggling like schoolgirls hoping to win my favour...all because i look like a mean muther fucker!....especially when drunk.