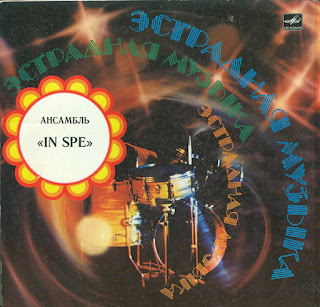 More Estonian Prog, with leanings towards the Neo-Classical trend of Estonian modern composition that augmented the record collections of many a social climber in the nineties;filed next to 'Le Mystère Des Voix Bulgares' and Arvo Pärt's 'Tabula Rasa'.
In Spe contained one Erkki-Sven Tüür as composer-in-chief.Later to be seen hob-nobbing with all those serious chaps on ECM. Was even pretentious enough to use the word 'Symphony' in the titles of his neo-classical outings,including the opening suite on side one.
All that aside, this is a classic of Estonian prog, and may even be the best symphonic prog album to come out of the Soviet Union.

DOWNLOAD in spe mp3 HERE!
Posted by Jonny Zchivago at 23:13

I actually have heard of In Spe, but it was so long ago I can't remember what they sounded like. It was probably back in the day when Recommended Records was smuggling stuff out of the USSR. They issued a cassette of underground Russian bands that was generally a hands-down improvement over similar western fare at the time. Everything’s better when it's clandestine, eh? I understand those pirate records that were pressed on x-rays fetch a lot of cash these days.