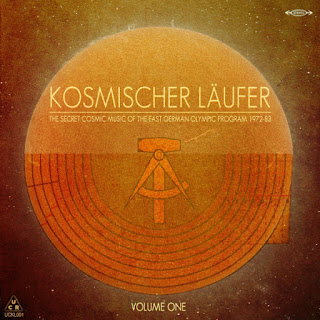 The myth spoiling music Stasi have suggested that this is an elaborate hoax.The same bastards who unveiled the identity of the Residents, and that Captain Beefheart made nearly everything up.
This should be ignored, and I truly believe that this music was comissioned by the DDR government,and those drug fuelled monsters in the DDR olympic squad used this to train to.
As Hoaxes go, this one is impressivly watertight,which is reason enough to put that aside and enjoy the georgeous analogue beauty of the Kosmiche Musick trapped in these grooves, and imagine Heike Drechler downing gallons of performance enhancing substances to those classic warm synth sounds.
Here's an amusing interview with the, alleged, composer of these pieces, Martin Zeichnette:

Liner Notes:
This program should allow the average runner to complete a 5 kilometre run at a reasonable pace. Included are 3 minute warmup and warm down pieces.
This program was used by the East German Olympians in the 1970s.
Tracklist:

hmmmmmmmm not buying the hoax....maybe it's wishful thinking on my part. It is awfully kraftwerk like, but not offensively so! I don't know if I personally could fake this sort of thing...either way thanks!!

I can't think of any reason not to believe in The Secret Cosmic Music Of The East German Olympic Program 1972-83. You've just proven with your latest posts that its a well established tradition over there + I've never been in better shape (now that was a lie)

Cool. Not saying you are predictable, far from it, but with your recent posts... I was hoping for this classic to make an appearance. Nice!

I have all the vinyl of Kosmischer Laufer and didnt fall for the hoax but simply enjoyed the brilliant music, the concept and sleeve designs. Wouldn't it be great if was not a hoax though?