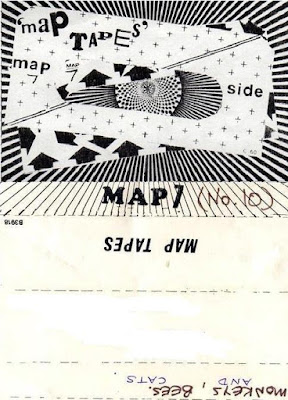 At last, the final installment of the epic MAP 7 odyssey; the UK cassette culture equivalent of the Icelandic saga's,Tolstoy's War and Peace,the ten hour long 'Shoah' documentary or the Greek legends.
The difference being that "MAP 7" doesn't bore the shit out of you. Constantly inventive, while battling economic restraints; always moving into different but related sonic territory,never boring. The shear weight of material is an astounding feat of ruthless creativity; either that or he had nothing else better to do.Either way this work survives as monument to the UK DIY scene of the early 80's, albeit a very well hidden monument,in the shadows around several corners behind a hill.Like erecting the Statue of Liberty in a crater on the dark side of the Moon(Obviously made from cardboard,sticky tape,and spit), only occasionally spotted by the odd errant Russian Lunar surface surveying satellite (I suppose that's a metaphor for oneself,beaming back the info to you back at mission controlski in Kazakhstan?)

01 Endomorphine Test Batch
02 My Face
03 Chimetime
04 In the Monkey House
05 Stop / Intruder
06 Rhesus Rhesus
07 Churchscrape / Clockface
08 'Can Bees Hear Sound?' (A Soundtrack)
09 Reprise
10 Skin a Cat
11 Kill that Hero
At Last its the final DOWNLOAD of MAP 7,so click HERE quick before I find another one!
Posted by Jonny Zchivago at 13:42

the completion of the MAPathon is as good a point as any to thank you for your blog: so much unheard or unknown music!!! I could go on and on ... both about stuff I had never heard of, such as MAP, or the more obscure releases of well-known acts, e.g. Throbbing Gristle. Just spent part of the weekend listening to Klingons, Sea of Wires, Steve Austin, Paul Nagle .... Fantastic!!!!

Speaking of Throbbing Gristle: did you at any point post the 4-volume Live TG set here (or at C30C60C90)?! If so, could you repost them? Thanks!

This MAP stuff is an incredible achievement and I've only listened to bits of it. I'm still gettin my head around those 5XOD tapes you posted which are also great. What a strike rate these guys had. How does the wider 'so called' underground not know about this stuff? All of this should be getting some kind of deluxe reissue treatment like say Cleaners From Venus got a few years back. Not that I would buy it...oh...maybe if they did some kind of cassette boxset rerelease.

Deluxe box set treatment sounds good.....thinking of crowdfunding something in this area.Of course donators get a free copy.....interested?

thanks for comments.
Jonny, I've just realised that the MAP 7 covers are the same as on the 5X0D soundcloud site! - I've removed the covers with the address on that MAP requested from soundcloud.

I've reposted the covers of all MAP7s onto 5X0D soundcloud with the addresses blanked out Jonny. Downloaded your images to do this and save me rifling through my cassette boxes and having to rescan them all! If you can get the blanked-out images from soundcloud you're welcome to use them...phew.

I'd buy the shit out of a vinyl reissue... that would be incredible!

Well,good to hear that.I am planning on trying to start a non-profit subscriber based record label in the new year.Just need to raise a bit of finance.So watch this space.

Would the label also be called "Die or DIY?" That's a pretty nice name.