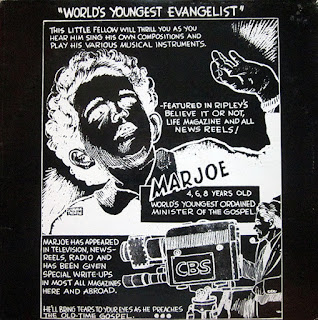 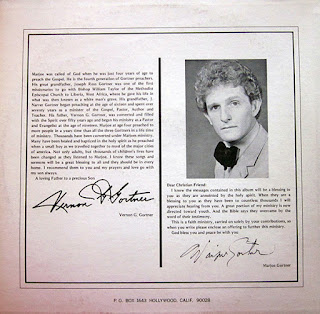 Marjoe Gortner ,the worlds youngest preacher, began harming brains and ears at the ripe old age of 4??
He first gained public attention during the late 1940s when his parents arranged for him at age four to be ordained as a preacher, due to his extraordinary speaking ability. He was the youngest known in that position. As a young man, he preached on the revival circuit and brought celebrity to the revival movement.
He became a celebrity again during the 1970s when he starred in Marjoe (1972), a behind-the-scenes documentary about the lucrative business of Pentecostal preaching. This won the 1972 Academy Award for Best Documentary Film. And is now noted as one of the most vehement criticisms of Pentecostal preaching west of the Pecos.
The best thing about Marjoe was that he admitted to being an Atheist, and he only did the preaching for the money.Not that that stopped him getting any bookings however!?A lot of such admissions were revealed in the documentary film.
The fact that a four year old can extol the virtues of christianity to an adoring audience of desperate 'adult' americans shows the intellectual depth that this nonsense requires to quickly build up a following of willing cash donators. Its just another confidence trick that too many humans are only too enthusiastic to be suckered into;but at least they know they're gonna live forever? Until they die that is.
Fuck Me! Will someone tell this kid to SHUT UP!!!!!?

DOWNLOAD the wisdom from a four year old's mind HERE!
Posted by Jonny Zchivago at 12:45

Swap Marjoe Gortner's name for Greta Thunberg's, and the parallels are uncanny!

Except Greta isn't doing it for cash.....maybe?

True enough. I'm not questioning her motives. And her apocalyptic worldview may even prove to be justified.

But in the meantime, what you wrote here: "The fact that a four year old can extol the virtues of christianity to an adoring audience of desperate 'adult' americans shows the intellectual depth that this nonsense requires to quickly build up a following" put me in mind of the way politicians have swooned in her presence, as if she has some profound insight, which she patently does not. "Desperate" indeed!

The poor sods need a figurehead to do anything.....even if they are spouting complete nonsense. Hysteria will destroy the planet/human race long before the climate does.

Marjoe became an actor & appeared in a slew of 70's B-Movie schlock. He turned in an extremely convincing portrait of a raving sadist in "When You Comin' Back Red Rider?" from '79. The turgid title & uber bad vibes have left the film all but unknown but Marjoe's performance gives it a special atmosphere & i think most misanthropists will rate it highly. I believe it's up on the Youtube.

Also, everyone's favorite ultra PC comic, Sam Kinison started his career as a teenage Pentecostal preacher & he incorporated the screaming & intensity of his preaching routine into his famously family friendly stand up act for all to enjoy.