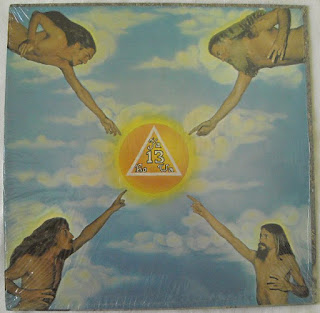 Father Yod,inbetween bouts of 'sex sans orgasm' with teenage women,literally broke his back for the Source Family cause,aka the Father Yod cult.On August 25 1975, YaHoWha “left his body” nine hours after his debut hang-gliding flight straight into some rocks in Hawaii.They kept his body for three and a half days chanting Yod He Vau He,but ,unlike Jesus,he never rose again to walk the Earth.This is nothing unusual as Jesus,contrary to popular belief in some stone-age influenced time warps on this planet, didn't either!

This eponymously titled self-made album of source family acid rock jams is ,in some ways,the psychedelic equivalent of doing the same thing with music.Except that this still stalks our terrestrial domain looking for disciples to fuck up. If the bible was converted into a musical by a bunch of drugged up hippies fronted by a grey haired svengali and his hareem of teenage girlies,then maybe i would have bothered to have engaged with the story a bit more.As long as I didn't have anything to do with them of course.
This is what rock music should be like,that rare modicum of pure liquid madness mixed with raw incompetence and cluelessness,leading to the accidental treasures that appeared under the auspices of Ya Ho Wa 13.
Way better than the Grateful Dead,who are shite,in fact I'd say,in my opinion, that these nutjobs are best American 2nd wave Psych Band in existence.....probably?

DOWNLOAD from the source HERE!
Posted by Jonny Zchivago at 10:35

'Father Yod'......the name certainly triggers my bullshit detector. I believe the current term for orgasmless sex is edging. I s'poze that's how you tell yourself that you didn't REALLY have sex with a minor. This probably is better than the GD. Thining of them and the 50th anniversery of the release of Trout Mask Replica reminds me of the time I attempted to introduce my deadhead brother-in-law to the good Capt. via that album. The meeting did not go well. Perhaps TMR is the cynic's reaction/antidote to all things hippie/trump/lie. BTW, my deadhead bro-in-law is now also a trump supporter. Christ....

LOL, nice one," that's how you tell yourself that you didn't REALLY have sex with a minor.".....kinda sums up the 'Free Love' lie nicely.
Christ, The Grateful Dead are probably thee least Psychedelic band I know of.
I will make a small Trout Mask Replica post to celebrate as they also fit in the 'Cult' theme somewhat for that album at least......my brother-in-law is a Brexit supporter....common theme there,but i doubt he even likes music at all!

Big J spent his formative years studying with Indian mystics before getting nailed to a tree for fucking with the money leaders. Either that or he was in his shed perfecting his carpentry skills, the Bible doesn't say. Probably didn't want the plebs realizing they are divine beings if they put their minds to it and don't need salvation by donation (don't worry if your crops fail you can always get a loan...) Anyway Big J does a yogic resuscitation before fucking back to Kashmir leaving the zealots to stew in their supremacist delusions. Don't blame him really.