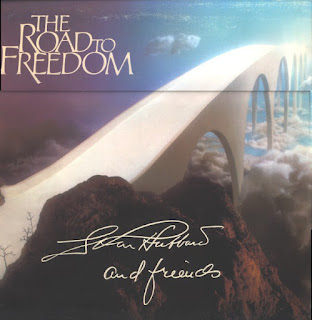 My E-Meter is going haywire with excitment! Movie Star John Travolta, failed teen idol Leif Garrett, jazz legend Chick Corea and other fucked up failed celebs, get together to flesh out Dianetics guru, L. Ron Hubris's compositions on this toe-curlingly baaaad album. If this convinced anyone to become a Scientologist after absorbing its very eighties production values and creepy joy, then they probably already were in the first place.
Pseudoscience-fiction writer,L. Ron wanted to show off his newly purchased Fairlight to a modern audience,and ended up with a shadow version of the 'Ghostbusters' soundtrack.
The fact that its so cleanly produced only adds a more spooky stepford wives essence to the usual sinister aire that Scientologists radiate.....I mean, Tom Cruise for fucks sake!?
I'm frightened, I quite like listening to this shit!?
Why is nothing more unsettling than listening to unbridled Joy? No matter how genuine or fake it is......and this is very fake, believe me.

A1 The Road To Freedom
A2 The Worried Being
A3 The Way To Happiness
A4 Make It Go Right
A5 Laugh A Little
B1 The Good Go Free
B2 Why Worship Death?
B3 The Evil Purpose
B4 The ARC Song
B5 Thank You For Listening
Featuring – L. Ron Hubbard

DOWNLOAD from the information superhighway to freedom HERE!
Posted by Jonny Zchivago at 01:03

It just gets better and better doesn't it? Pheeeeeeeeew...

My goodness this sounds like an awful album BUT I still need to hear how low these stars/musicians can lower themselves in order to bow faux thanks to the Dianetics mob!

Should perhaps be mentioned that it includes performances by Chick Corea, Gayle Moran (Mrs. Corea and ex Mahavishnu Orchestra), Nicky Hopkins, John Travolta, Eric Marianthal...I have no connection to scientology but if one puts the prejudices away there is some fine pop/fusion music here.

Did you know there's also a german version of this album available which means all the vocals (except Ron E.) are sung in german language?

Would dearly love to hear that! Anything sung in german takes on a whole new level of wrong.

Finally I remember my promise, so here it is, scientology sung in german by non-germans. Apologies for the delay...

Thanks martinf! Ill listen to this on an empty stomach....just in case.