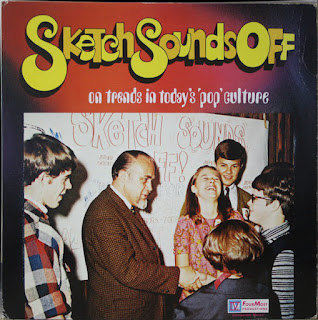 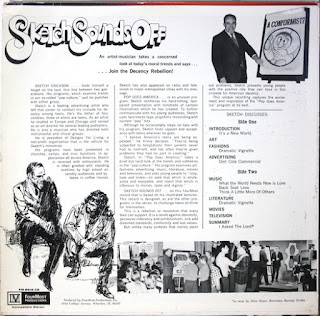 Join the "Decency Rebellion" with some clueless bastard called 'Sketch' Erickson, on a holy crusade to not rest until he turns all teenagers away from religion. He uses unintentional reverse psychology to make christians look like thee most idiotic, completly naff, joyless stiffs that they undoubtedly are.
I love that sketch,by Sketch himself, on the back cover of our hero chatting casually with a 'Teenager'.If there was ever a better capture of the word and meaning of 'Patronizing' then I wanna see it.
If any teen actually listened to this absurd album, they would have become an athiest within the first thirty seconds.
The distinctly ungroovy Sketch, lets Pop Culture have it with both barrels pointing at himself.How Pop art is rubbish,pop music is lustful propaganda from Satan,while tactically admiting that there are actually some 'good' movies,art,and music.....i don't believe you Sketch;he hates all of it,and probably teenagers too.
The only way to break through the shallowness of the pop world is to be a follower of Jesus Christ,says Sketch.....there simply is no other way.
This Religious spoken-word LP with hilariously dated skits about how you can't tell the boys from the girls anymore,and more embarassingly rigid thinking, is essential listening for all you Satan worshipping pop fans everywhere.

By now Sketch has probably discovered, as he slipped away from this mortal coil, that nothing happens after the last round-up.Its just a pity he's not around to burn this ridiculous LP before he returns to  the oblivion from whence he,and we all, sprung.

A1 Introduction: It's A New World
A2 Art
A3 Fashions: Dramatic Vignette
A4 Advertising: Diet Cola Commercial
B1 Music: What The World Needs Now Is Love
B2 Music: Back Seat Love
B3 Music: Think A Little More Of Others
B4 Literature: Dramatic Vignette
B5 Movies
B6 Television
B7 Summary: I Asked The Lord

DOWNLOAD how to reject supersition HERE!
Posted by Jonny Zchivago at 22:44

Ol’ Sketch looks like he could have had his pick of those rose cheeked little cherubs on the cover. See how he makes that little girl tingle? (brrrrrrr…. creepy has a new personae) Why, that disgruntled teen on the back could well have been me. Why oh why didn’t I listen and, you know, repent, give him all my worldly possessions and follow him? It’s too late now; https://www.theledger.com/article/LK/20031103/News/608122461/LL/ Can’t even view the corpse. Dang! I’d concede every point he cared to make about pop culture, then and now, but the whole package provides able evidence that this profit was obviously sketchy enough to earn the name. I went to a local thrift shop today and thumbed my way through five large crates containing scores of christian albums and none where nearly as eye-catching as this. Can’t wait to give it a spin and transform my misguided, meaningless life. I’ll letcha know if it takes.

Its never too late to offer yourself to the lord. Depends which lord i suppose? In the UK there"s lots of Lords.....you can find them hanging around the toilets and bushes on Hamstead Heath every evening,after a hard day running the country in the house of lords.
I'll only believe Sketch is really dead if they produce a body. I believe he"s still roaming the earth looking for souls to steal.He can't steal mine unfortunatly as i'm a white man and have no soul; probably the only thing i have in common with the late Sketch.

Well, it's a well known fact that a soul can get you in a lot of trouble. I had mine removed after it got infected. It cold have killed me otherwise.