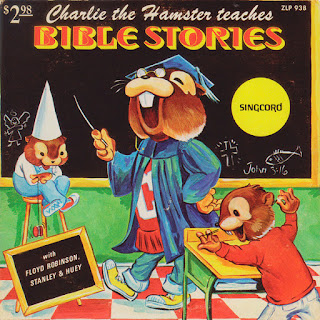 "Lets tell the boys and girls what's its like to live in a Christian nation Charlie", says this complete bastard Floyd Robinson. In fact Charlie is the only Hamster I would gladly euthanize.
This greatly irritating attempt to indoctrinate our offspring is one of the best arguments for capital punishment this side of the American Taliban bible belt's enthusiasm for "lynchin' n****rs",and stoning homosexuals to death.
I wonder what Charlie's opinions are on Blacks and Homosexuals?
Triple X-rated I should imagine.
I bet Charlie won't be relaying the Bible Stories about Genocide,Incest,Statutory rape,Rape,Infanticide,murder,misogyny,and how animals,including cute little Charlie aren't allowed in Heaven.

DOWNLOAD charlie teaching us some horror stories HERE!
Posted by Jonny Zchivago at 08:52

I'm sure Charlie is a good sort really, just scamming the rubes.

Charlie the Hamster & Little Marcie must also be behind the stabbings and acid attacks that are causing citizens to flee London like sensible rats running away from a burning falaffel stand? Or is that some other barbaric, ultra-sexist (female genital mutilation and don't try to drive a car or you'll be stoned to death), ultra-homophobic (tied to a chair & thrown off a rooftop) religion that's beyond reproach? I'd take Charlie over Sadiq the Hamster any day!

A good argument for abortion, but at least he's dead now; https://en.wikipedia.org/wiki/Floyd_Robinson_(singer)

mr George Orwellslaughing now, these creepy figureheads of evil are absolutely behind the sqbbings!; Who hasn't read the lovely tail of how Abraham (age 113 or something) was more than willing to cut his son's throat and felt the throbbing power of a knife in hand. Its the fucking bible wot done it, not Sado Kahn or........stop the Bible brigade and yoop knife crime. As for burning Falaffel stands, may I reference you to the burning bush episode?
Then we come to the Koran, as full of shite as the ludicrous Bible, but with even stupider followers. Bin these religions off with immeadiate effect and the worls becomes a great plce to live while you're waiting to die.

Some good typo's in the above reply....read them as intended.