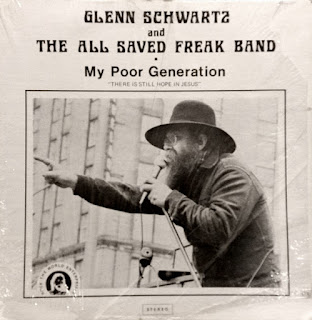 Glenn Schwartz used to be in the incredibly shit James Gang,apparently(?), before he found Jesus,joined a cult and joined an even shitter band.
Based out of a Christian commune near Orwell, Ohio, The 'All Saved Freak Band',included about 12 members,like an Electric Light Orchestra from a christian purgatory,complete with Cello's, violins and woodwind to back up the tired message.Sadly there is no Jeff Lynne or brummy humour to save us from the wailing and a gnashing of rotten hippie teeth here!Yes, everyone in this band are safe from hell's torment,unlike you and me,and they wanna tell us about it....a lot!
In February 1975,Glenn Schwartz's family had him kidnapped for an intense, three-day "deprogramming" effort by a famed cult deprogrammer called Ted Patrick. The attempt was,predictably, unsuccessful. So we had to endure even more albums for brown-nosing the holy ghost to after this debut,self-released, disc.

The music is some hybrid of boroque hippie folk and standard late sixties acid rock......not my cuppa tea,but as i like 'Cults',there is some much needed mental illness involved,so it interests one somewhat.

DOWNLOAD from hell and be saved HERE!
Posted by Jonny Zchivago at 08:36