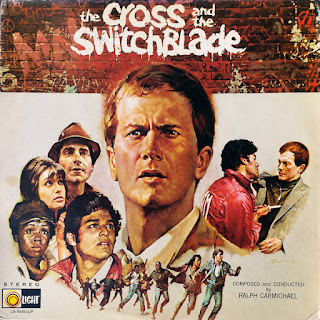 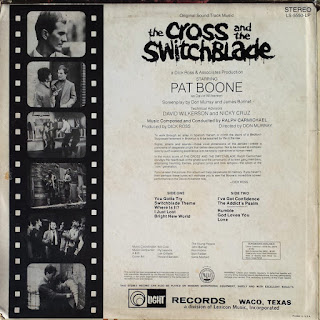 This is one rockin' mo-fo of a judeo-christian funk soundtrack, with the inevitable biblical message for the target audience. If you wanted to find some breaks to sample for your drum'n'bass project,you could do a lot worse than delving into this daft movie designed to appeal to the American christian demographic, also know as the moral majority.The ones who weren't allowed to watch 'Dirty Harry',which had an equally groovy soundtrack. Naturally they couldn't get Clint Eastwood to sign up for this one, so they had to make do with god fearin' housewives favourite, Mr Pat Boone.Let's just say, he didn't win the oscar that year.
Its a kind of 'Angels With Dirty Faces'remake,via 'West Side Story', with a whitemans Blaxsploitation angle......I guess,because I've never seen it,and don't particularly want to.It looks shit.
However, among the rehashed versions of Ralph Carmichael and the Young People numbers, there's some smokin' skin work by the session musicians. The naff criminal fringe beat talk as lyrics  in "Rumble" is worth the admission price all of itself.
I'm still waiting for that David Koresh musical,which could use adapted versions of some of these tunes? I can just visualize the Koresh character in ballet tights, doing some contemporary dance moves to "Rumble" brandishing an automatic weapon.
I think that could be popular. A new 'Springtime for Hitler'....anyone interested in providing finance? Just five grand for 200% of the profits.All donations accepted with the same terms.

You're a braver man than I am, Jonny. The internet salutes you!

Mel Lyman/Jim Kweskin up next? Kweskin's albums are the deepest I want to get in this culty stuff, because you wouldn't know he was a shape-shifting lizard overlord from listening to them.

They're the most dangerous artistes,the ones who you think may be just like you but turn out to be......well...shape shifting lizard overlords.
Luckily most Cults are so clueless that its patently obvious what they are up to if you have half a brain cell.
Wasn't Jim Kweskin in one of those, should be banned, Jugbanneds?

I've seen this bastard film! North Manchester High School For Boys was the biblical definition of a godforsaken place. But, that didn't stop one proselytising teacher from running this through a reel to reel projector and then encouraging the class of Year One god-fodder to absorb "THE TRUE MEANING".
Pissing in the wind with me. A few years earlier (when I was about 8?), my church of england primary school kept bringing in these happy clappy christian bastards to sing us such suicide affirming classics as "God's Not Dead" (he is alive ... apparently). Think Rod, Jane and Freddy but high on life rather then coke and group sex.
I clearly remember sitting in the assembly hall whilst all of the other kids were joining in and happily clapping whilst I was looking at them all thinking my eight year old equivalent of "Fucking Hell. What are you all doing you weird bastards, can't you see what this is all about?"
Many years later, I found out that I had been noticed and the head teacher (Mr Winterbottom) had instructed my mother to attend his office to inform her of his concerns that I was an atheist. She didn't tell me at the time as she didn't know what "atheist" meant. Not sure she would have given a shit anyway.

Given the number of evangelical flashbacks this has already caused ... I think I'll pass.

Being from a secular household, the question of god never ocurred to me,despite some feeble attempts by our own rod jane and freddy hippy teachers to force some modern hymns down our very uninterested throats at primary school. Later i encountered christians with astonishment.....wot?
Your mr Frontbottom is certainly now dead, and if he wasn't in oblivion,he'd now know that his whole life was a complete waste of fucking time!
Thanks a lot,the human flocking instinct of the hive mind.

Sorry about the flashbacks.....there's more of this stuff to come before i get to the ,equally as silly, Satanic stuff.

Now I have to see this movie! Don't you know you can't talk up trash and not make it interesting?
Oh wait, here it is! https://www.youtube.com/watch?v=JDoxDi0YAf8
Starring Pat Boone!, Erik Estrada!, Jacqueline Giroux! who later appeared in such classics as Vice Squad Women and The Dirty Mind of Young Sally! Praise the lord!