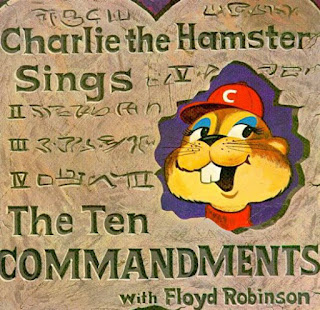 Ignorant of the raging Punk Rock wars of 1977, Charlie the Hamster  carries on regardless hammering christianity into the heads of the god fearin'kids in the states of the mid west and south. Roughly the same places the Sex Pistols visited on their fateful tour of the USA. They broke up, probably due to the power of Charlie The Hamster in alliance with God.
Commandment One, "thou shalt have no other gods before me"!?...says Charlie with a giggle.
He was either admiting that this awful little rodent was in fact 'God', or letting the secret out of the bag that there are, in fact, 'other' Gods?
So much for Monotheistic religion then?

Sadly, Charlie The Hamster went into a personal decline after recording this album. "I had to get off the treadmill," he said, "I was in a cage. Working for peanuts." Turning to drink and then to hard drugs, he burned out at the early age of three, a shadow of his former self. His last words were said to have been "screw the baby Jesus."

I was aware of his slide into alcoholism,but the drugs????...No,no,no,noooooo Charlie, Nooooooo!
Devastating news,especially as I gave birth to Charlies love child.
I wondered why the alimony payments were,at best, sporadic.
Of course following his demise I will be taking legal advise on ownership of these albums master tapes.......then burn the fuckers.

The susceptibility to deception by religions naturally lends itself to also being susceptible deception by chemicals. Now that I look at him, Charlie does appear to be pretty high on the cover, must’ve been late in his christian recording career before the fall, or assertion according to your tastes. It always seems to be the case with the faithful of either losing it on drugs only to be saved by religion, or vice versa. If nothing else, these records do inadvertently tell a cautionary tale.