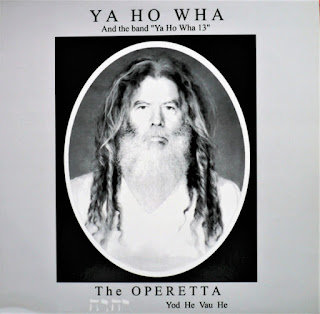 Not that all the original Ya Ho Wa 13 albums actually received a proper well distributed release at all,this collection of 'previously unreleased ' material from 1975 has been sourced from the archive of drugged up jams made at the Source Family home.
Contrary to his Yod-like status,this wasn't made after his death, but before Father Yod decided to jump off a cliff having never used a Hang-glider before. At least this ill-advised decision made hundreds of young hippie girls safe from his filthy wandering beatnik fingers.
Dunno about any Operetta,but it wouldn't surprise me if Yod,Jim Baker, thought very highly of his vocal attributes,but he certainly had some kind of God or Yod complex.
The music, is the same chaotic free acid rock jams, with Father's throaty cries and chants permeating the mess.It shouldn't do, but it works.

DOWNLOAD from beyond yod's grave HERE!
Posted by Jonny Zchivago at 23:42

a friend recorded them again in the early noughties as you say....he said they were insufferable twats, but I wouldn't expect otherwise! Don't know if the recording was released...plus no father yod!!

as you are a bottomless wealth of music...have you thug's 'mechanical ape' lp?....hope you're well.