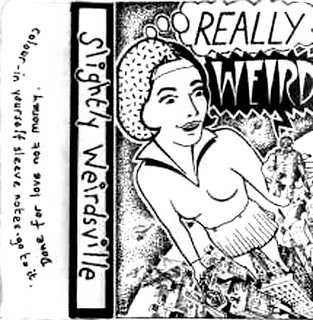 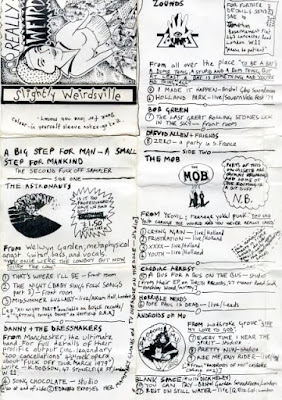 Fuck Off Records go 'Anarcho Punk' compilation.
With The Astronauts, Zounds, and The Mob taking up the majority of the tape space, with only Danny and The Dressmakers giving us a welcome break from either crusty old anarcho-hippies or their preachy relatives from 1981.
I admit, this is from the more listenable end of the genre,with no crass-a-like shouty nonsense,and well crafted songs with lyrics one can hear. The uniformed masses of the Anarcho-punk hordes are a depressing mirror image of the Hive Minded masses,and i've always found it utterly repulsive with its silly banners and washed out blacks.Alas, I do have a soft spot for The Mob, who's musical incompetence is an attractive feature in their sparsely arranged and simple tunes. The Astronauts are a bit too close to, the even worse, Punky Folk style,that later gave birth to the abysmal Levellers, a group that makes me wanna smash up my record collection. The Astronauts are at least outsiders, so that scores many brownie points.
The Androids of Mu are, of course, Great; although they do represent the transient anarcho-hippie community turned punk; but I can overlook that faux-pas as the music is charmingly lightweight in that now rare anti-masculine ,girlie style.
Sticking out like a very sore thumb,both musically and in sound quality,is Cardiac Arrest; the precursor to Cardiacs, with their classic single which, along with their album, you can get here!
There's the Hippie Punk of Blank Space too.....not bad that.
On the more negative side is one of thee worst tracks i have ever heard on Fuck Off Wreckords;namely Bob Green's terrible post hippie awfulness about some rolling stones lick in the sky.....yuk! Also there is a totally unlistenable track from Daevid Allen and friends!
But don't worry, anything with Danny and the Dressmakers on it can't be anything other than Brilliant!

Thanks Johnny. I find myself agreeing with the vast majority of your comments. I did enjoy Crass back in the day (although Steve Ignorant's voice grated on me...I preferred it when the women did the vocals) but the one time I saw them live I found myself taking abuse from uniform black-clad anarcho-sheep (oh, the irony) who decided to take it upon themselves to call myself and my friend "hippies"...simply because we weren't dressed the same way they were and perhaps were a little rough round the edges due to the fact we were squatting at the time. I had a lot of time for Androids of Mu, who were mates of Here & Now and co. In fact H&N and The o12 I thought had more idea of what anarchy was about than most of the black-clad hordes, and perhaps Mark Perry agreed; maybe why ATV decided to tour with them in 1978.
The Mob I also had a soft spot for, and The Astronauts had and still have the advantage of a brilliant lyricist in Mark, who is still touring and writing in 2015 with some young blood on board, sounding great in my humble opinion. He's out on his own, I think. The Levellers may be influenced by him but they've never been in the same league musically or lyrically.
Looking forward to listening later on today - Danny & The Dressmakers always welcome too!
Thanks alot :)

Crass,groan.....that drummer!!1...never mind steve ignorant,who was probably the only working class person in the crass community. 'Anarchy' was a way of getting back at daddy;and making oneself feel better about one's trust fund that the majority of the black clad twats gratefuly absorbed when they grew up to become part of the tory party after they were thirty. Kunts.
I quite like rudimentry Peni,as well. ATV, quite rightly, had fuck all to do with these posh twats.Mark Perry is as purer punk rocker as you could possibly find.....ugh...Crass.

great post although Androids Of Mu "Every Time I Hear..." is repeated in place of Horrible Nerds track...original mistake or lost file? keep up the good work anyway!

Sorry to bother you but track 14 is the same as track 15.

Bollocks!....my error....will fix asap.
Although the Horrible Nerds track is terrible on many levels,so you ain't missing anything.
But for completists sake i will resolve this cock up!

Jeez, I'd completely forgotten about this one! Thanks Jonny. Whilst we're on the subject of ancient, Fuck Off related recordings, does anyone have a copy of "Music For Pressure"? The only track I remember was a Steffe Sharpstrings solo track called "Violent Maze" and I've not heard it since my tape went awol in a house move a hundred years ago. Anyone?

Agreed,'Music for pressure' would be gratefully received in these hallowed pages if anyone hasn't lost or taped over their copy?

Now updated with the Missing Horrible Nerds track, which is in fact not as bad as i made out earlier.....i must have got it mixed up with something else?

I just watched BBC4's indie documentary and I expected it to be a bit crap but I was disgusted that it wasn't followed by a programme of clips called Danny and the Dressmakers at the BBC. They can stick their TV license up their hole.

Yeah,I just watched that, totally High End DIY. Completely ignoring the unwashed masses of REAL DIY.....and it ended with the Fucking Smiths!? If that's the kind of DIY labels they focused on where was Virgin? That was an indie label in 1973.
I'm not sure any clips exist of Danny And The Dressmakers? There was a film of the Deeply Dale Festival 79 or 80,but i'm not sure I saw The Dressmakers on that at all? Is there anybody out there who can help us?
And yes, its time to end the propaganda machine that is the BBC.