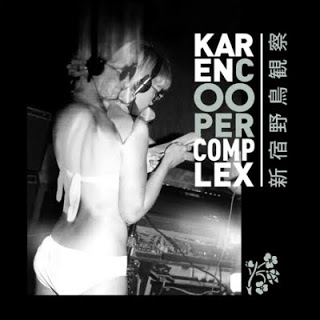 Here's one of those unreleased in their lifetime oddities that we, in this musical desert we call the 21st century, are astonished that this was ignored back in the day. But there was a lot of competition back in what I often refer to as the 'Golden Period' of pop, 1978-83.
What we have here is basically 'The Art Of Walking ' period Pere Ubu with David Thomas replaced by Karen Cooper, who vocally improvises her way through this avant-prog no wave improv classic.
Unbelievably, This group never performed live, recorded this album, then Karen got pregnant/married, and that was it!? Life imitates art imitates life, and cancel each other out.Emitted from the resulting blackhole spawned forth this lovechild.An unloved twin of the sprog that Karen Cooper dropped after having it off with the guitarist!

Don't get a complex DOWNLOAD one HERE!
Posted by Jonny Zchivago at 00:37

Very much so.So much so she got a complex about it.

Yeah, I love, love, love this album - got a rip of it a few years ago via the wonderful WMFU blog and have been astonished that it hasn't had a reissue as it's one of the best unknown albums ever issued on the interweb - it's that perfect blend of no-wave, post-punk, primitive-electronics and avant-prog with a touch of delirious derangement thrown into the mix - there isn't even a Discogs entry with a single vastly overpriced copy for sale, which makes me wonder just how many copies were pressed (or were they?).

Mutant Sounds posted it ages back, but I lost my rip and I can't find it anywhere on the interweb, so if you or anyone has a rip of it, I think it well deserves a blog post or a link in the comments section (obviously I would think that, hence the request)

There are some great tracks on it, like Phil Brammer's When Will You Decide, Franz Czech's Music By Numbers and Sea Of Wires' Alien Voices to name but a few - Phil Brammer also released a 1982 single called 'London Pleasures' but judging by the near £100 price tag on Discogs it's rarer than rocking horse shit.

I try and keep my requests to a minimum as it is an annoying assumption that a) every blog owner has the entire world's record collection in digital form at their disposal and b) they want to share anything with you - but when it's something that would fit nicely into the DIEORDIY2 aesthetic, it's worth asking.

PS> For anyone interested, The curator 'Artifacts/yclept' who posted the Karen Cooper Complex album has some other great stuff from the late seventies/early-mid eighties for free download: