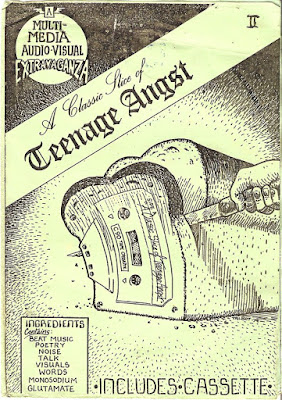 There was a second issue of Preston based Fanzine Teenage Angst, a shit-fi multi-media extravaganza which included volume 2 of a cassette of more bands from Preston.
First up is the obscurely named 4NT, a rough as old arseholes proto-indie band, recorded in the lowest possible fidelity like some phantom band haunting a pub, who died in 1979.
In between the tracks we have that droning john cooper clark on mogadon,introducing the bands after a classic slice of his bad teenage poetry.
I did have a cassette of the next band, the PR5 (a Preston post code no doubt), but tragically this rarity disappeared long ago.They sound quite interesting here, with a kind of disjointed Dub Punk which makes me regret somewhat, that I mislaid that tape(probably taped over it with some Simple Minds or something equally horrendous that we thought was musical advancement in 1981?).
"What in the Sam Hill was that?", was a phrase one would hear in american movies in the seventies to replace the 'F' word. Who the Sam Hill was Sam Hill I have no idea,but, here we have the Preston version.
Sam Hill sounds like the kind of irritating prat who brings his acoustic guitar to parties and starts to sing some songs later in the evening.And we all have to listen!......invariably he always got laid no matter what awful, well played shit he came out with. That's what he comes out with on this cassette; awful, technically good, tuneful adult orientated soft rock(Jesus does get a mention,which could explain a lot). Like he must have lived in a cupboard for the previous two years.
The Ribblebeats get fashionably berated by our announcer for(probably) referring to Girls in their merseybeat tinged indie pop,which is charming but unremarkable.
Side two opens with another Earcom band, The Blank Students, who sound very different to their two tracks on "Earcom 1".A bit like a funky Josef K,they obviously had trendy ambitions;even managing a Peel Session in '81.
Urban Renewal are another band on the slippery slope as pop evolved from punk to Indie.You get the sense that they'd like to have been Discharge but couldn't afford the amplifiers.
High Bias, as featured on the "Camouflage Nebula" tape, make a welcome reappearance, with their/his raw minimal analogue electronica. Very second decade of the twenty first century stuff.
Persian Drumstix ,terrible name, are another proto-indie thrash unit,that sound like they were recorded from outside the rehearsal room without their knowledge. Its like the listener(that's us!) is spying on this forgotten group, rehearsing for a gig that never happened, from inside our ferric-oxide time machine.

(If anyone out there know's the Titles of any of these unknow tracks,please feel free to let us know...cheers.)


DOWNLOAD a second slice of teenage angst HERE!
Posted by Jonny Zchivago at 08:53

As I recall, Andrew Hobbs who put these tapes together actually was a committed Christian. He did a fanzine in which he declined to print the name of a band called God And The Turds.

Yes, there is a performer on here that makes unpleasant references to certain supernatural entities.....its no coincidence that he is the worst act on show. Whats so blasphemous about God and the Turds? isn't it a reference to God and his children?

Yes, guilty. I was that born-again droning john cooper clark on mogadon. Apologies for being a dick in those days. Anyway, we still got some good stuff out there!

No need for apologies Andrew, without people like you we'd have nothing to write about....better than being a dick now I suppose, like me.
Thanks for the tapes and stuff anyways.