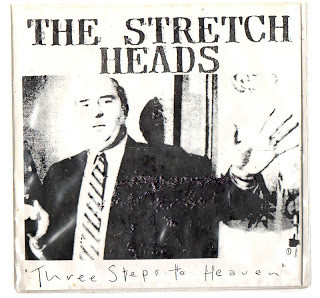 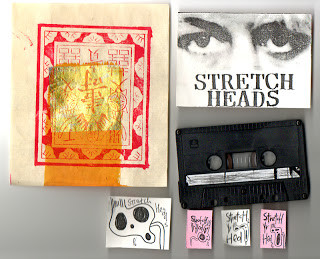 "She's got Myra Hindley Eyyyyyeeeessss".....remember that Hit for Kim Carnes?....or was it Dickie Davies Eyes?.....one of the two anyway.
Dickie Davies, for the minuscule minority who are ignorant,on a need to know basis,that,Dickie Davies presented Itv's 'World of Sport' every saturday on British TV.Oh yeah, and Myra Hindley was the blonde one in The Moors Murderers....Nooooo, Not that Punk Group of the same name which Chrissy Hynde and Steve Strange were in for five minutes in 1977, yer actual child killing Moors Murderers.
Anyway,Those Scottish types ooop north weren't wasting their time watching World Of Sport on saturday lunchtime,oh no...they were down the pub getting pissed (as in 'very drunk' for you yankophones).In the case of the Stretchheads,they were busy getting Pished (scottish for Pissed for you Anglophones),then going on to rehearsals after last orders.I'm sure they intended to sound like The Shrubs,but ended up sounding like an Exhibit A recording of one of The Moors Murderers'(not the group!) victims being tortured,....if they were in their twenties and extremely pished.
This deranged version of Grind-core meets Captain Beefheart, on past their sell-by date amphetamines, would have been the perfect soundtrack for a child killing,but Brady(The Scottish one)and Hindley's artist of choice was The Ray Conniff Singers christmas album (This is pure Evil...the Little Drummer Boy) to accompany the torture of Lesley Anne Downey,which they recorded.....crazy but true.That one was indeed Exhibit A at their trial,and doubtlessly still exists in the vaults at New Scotland Yard.....potentially Throbbing Gristle before Throbbing Gristle?...Whereas, Stretchheads were potentially Grind-Core before Grind-Core, but without any reference to Impending Nuclear destruction or evil multinational corporations leading us all from enslavement to obliteration.....y'know, that kind of thing.
The nearest equivalent has to be something Japanese? Maybe Melt Banana? A duet between Yasuko Onuki(Melt Banana) and P6 (that's the name of the Stretchheads' singer,screamer,vocalist etc???);would be something to behold.....except The Stretchheads split up and Melt Banana plough a lone furrow of truly demented Hardcore still...so no headlines of "Melt Banana Split" can get me off the hook anytime soon!
Any group with a vocalist called P6,high speed prog rock chord sequences,and recorded well into the red Zone has to be good? No?
They should have been rightly revered by the Noise-Core youth of today, but they did the right thing by splitting,citing record company theft as a primary motivation....so they now advocate illegal downloading of their back catalog....so you can make the band happy by starting HERE!...and make me feel like Dennis Moore giving lupins to the Poor again.I love you all.
Tracklist:
1 Sidatorium
2 Chicken Fish
3 Confront
4 Fans
5 Headache
6 The Illness
7 Skinrin
8 Jawbox
9 Cancer

'Steal' from the stretchheads' former record companies HERE!.....but its still sharing as far as i'm concerned.
Posted by Jonny Zchivago at 13:00

Sorry to be the Twat that points out to you that the link is favoring Dennis Moore...good sketch and reference, but you've wet my whistle to hear The Stretchheads now....

I'm just thick, need a lyric sheet, Got one? Pretty sure I'm on board, just 'aven't a clue wot they're on about.

Most persons need a lyric sheet when it comes to the scottish dialect, but for a Stretchheads song,it may be essential.

Nathan...some people has no problem, i suspect as there are two links for the file, i may have inadvertently linked Dennis Moore twice and not once? All is fine now i fixed this wrong....you will need a lyric sheet however....if you're into such things

when they played the broken doll they stopped the set so the singer could go for a poo.

GG would have pooed on stage and thrown it at the audience. Great post by the way, really enjoying the Stretchheads, Boots For Dancing and Death By Milkfloat.

Thanks Jonny. I once had a northern Scot flat-mate; never understood a word he said the whole time we shared digs, but he was one of the funniest guys I've known...I think I'll be good.

Yes this is proof that Scotsmen are more civilised than GG Allin....which isn't saying much.

Nathan, i had a scottish girlfriend for a loooong 7 years,so i got to understand the most impenetrable accents in and around Glasgow. Had to endure many a new years drinking session,and they were all very funny as far as i could see.....except my GF who lost her sense of humour after about ten beers,and would attack any female in my vacinity.
Great place is Glasgow;)

Jonny, I also had a girlfriend from Loch Ness (no shit) one summer...she didn't have much a sense of humor put she could hoover the paint off the walls, so we were all good.

Nathan...the loch ness monster?
I took mine to see Loch Ness because she'd never been there...in fact nowhere too far north of ravenscraig steelworks,in motherwell. In fact Motherwell Liesure Centre was opened by the Friar of Buckfast Abbey...which if you know your low-life scottish culture is a popular fortified wine that can cause 'lost Time',you drink it in one place then two days later you wake up in another place far away...of course with an empty bottle of 'buckie' beside you....but on the bright side and several girlfriends down the line, i am now a happy batchelor,who can play Strethheads record without a pain in the fucking arse saying can't you turn that shit OFF? I have never been happier.