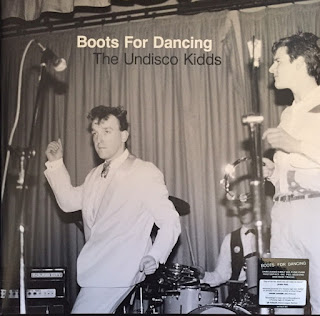 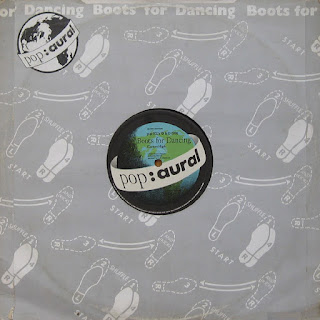 Bonnie Scotland were not just responsible for such reasons not to exist as Deacon Blue, The Proclaimers,,and Big Country, they virtually invented Indie-pop the night after witnessing Subway Sect on the Clash's White Riot tour....Josef K, Orange Juice,Fire Engines, Boots For Dancing,and......hold on big man,what was that last one?
Yeah, Boots For Dancing, the celtic cousins of Gang Of Four and A Certain Ratio, so accurately described by Rezillo and Dare-era Human Leaguer Jo Callis as "Schrodinger's crazy cats writhing about in a Faraday cage,all charged up"....couldn't have put it better myself. So  scratchy and funky were they that John Peel once threatened to dance upon aural detection. They did release two singles on Bob Last's legendary "Pop:Aural" label after all...all included here.
It's the kind of off kilter post-punk-funk that gets the white man's foot-a-tappin' for sure.A style that would crop up on Top Of The Pops in the form of cute but funky plagiarists Haircut 100 and floppy fringed cringe-meisters Modern Romance,with a polished up version of ACR and Boots For Dancing for the great unwashed and the even the less great unintelligentia who form 90% of the 'Public'.
Undoubtedly, these groups were also a major influence on Ron Johnson acts such as Twang! and mid-80's post-punk Scot-funksters The MacKenzies,until the Kids found different ways to dance post-chemical enhancement after 1988....i'll leave it to you to imagine what that could have been?
Anyway...All the singles,three John Peel Sessions,and some demo's for a future Lp that never materialized,are on here......groovy baby.
"I Like Dancing but I don't Like Disco's" is the manifesto from the debut single back in 1980.....as for me, I don't Like Dancing and I don't like Disco's.....but if i'm drunk i firmly believe I could to this?.....hmmmm, maybe not?
Tracklist:
1. Boots For Dancing (Pop Aural Single 1980)
2. Parachutes (Pop Aural Single 1980)
3. Guitars & Girl Trouble (Pop Aural Single 1980)
4. (Let's All) Hesitate (Peel Session 17.11.1980)
5. The  Pleasure Chant (Peel Session 17.11.1980)
6. Timeless Tonight (Peel Session (17.11.1980)
7. South Pacific (Peel Session 17.11.1980)
8. Stand (Peel Session 13.07.1981)
9. Shadows Of Stone (Peel Session 13.07.1981)
10.Wild Jazz Summers (Peel Session 13.07.1981)
11.Get Up (Peel Session 14.04.1982)
12.Salt in the Ocean (Peel Session 14.04.1982)
13.Style in Full Swing (Peel Session 14.04.1982)
14.Bend an Elbow, Lend an Ear (Peel Session 14.04.1982)
15.Just the Ticket  (Barclay Towers Studio October 1981)
16.Money (Is Thin On The Ground) (Barclay Towers Studio October 1981)
17.Wild Jazz Summers (Barclay Towers Studio October 1981)
18.Shadows on Stone (Barclay Towers Studio October 1981)
19.Oh' Bop Sh Bam (Barclay Towers Studio October 1981)
20.Hesitate (The Rain Song 7'' Pop Aural 1980).
21.The Rain Song (The Rain Song 7'' Pop Aural 1980)
DOWNLOAD yer dancin' boots HERE!
Posted by Jonny Zchivago at 14:43

I was pretty happy to see the reissue on this so its even better to get the bonus tracks you added (really I'd like to see a Pop Aural singles collection similar to the Fast Product "Riguor, Discipline, Disgust" collection).
Otherwise (on the Ron Johnson topic) I mainly just wanted to mention/ask if you'd seen the SPLAT! reissued stuff (since I'd imagine you'd be interested)... Cheers, M.
https://www.amazon.com/music/player/artists/B09G37HYXX/splat

There with you for Pop:Aural collection.
Not aware of Splat! reissue...scarce ro say i will seek it out.Cheers.

Yeah, seems like there's a lot of reissues that pop up seemingly from nowhere these days with the ability for bands to do digital and use places like bandcamp. As for a Pop Aural collection, I guess since there's already the Boots For Dancing and Drinking Electricity and various Fire Engines reissues there's maybe not enough left to warrant doing one (especially if the Flowers end up with an official collection in the near future too).
Cheers, M.

I'm generally terrified of anything within a grenade's toss of "Celtic" music but I think I'm going to risk the click on this one. If I hear anyone trying to light a fire by furiously rubbing cat guts back and forth or have any river dance flashbacks Ima gonna curse you under my breath, Johnny.

Fear Not mr Dave,'tis not that kind of celtic, more to do with celtic and Rangers than fiddle scraping ,but it is about silly dancing rather than the silliest form of dancing,ie, Irish dancing or sword dancing and the like.
Me? I can'd abide the Pogues, but i have been know to err onto the folky pathway at times.Although this isn't the case on this occasion.

Looked up the Pop Aural discography on discogs and you're right there's not much there besides Drinking Electricity, Fire Engines, and Flowers. The exceptions are a quite nice Restricted Code single, Marching Girls and a very strange EP of Holiday Inn lounge music by Frank Hannaway & Michael Barclay. I guess they were into Martin Denny before it was fashionable.

Interesting that there's a band named Shoes For Industry and another named Boots For Dancing.

Dear Anonymous...thanks for that fact...it kept me tossing and turning all night thinking about how can two bands have names involving footwear, but for such different purposes!