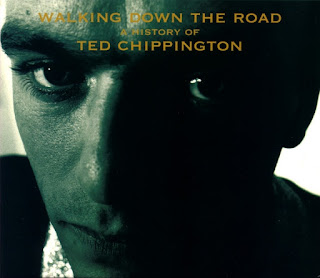 "I was walking down the road the other day, mate of mine pulled up, in his car,and he said, "I'm in a dilemma mate" and I said, 'Aye, good motors, Dilemmas. I was thinking of buying one myself. A red one perhaps?"
A box set...you heard... A BOX SET!?.. of the Anti-Comedian's Anti-Comedian,Ted Chippington. Whose act consisted of but one joke,which invariably began with "I was walking down the Road...", a wanton act of minimalism intended to wind up the less savvy members of the audience, which for the most part were there mainly for whatever indie band he was usually supporting.He only had one joke, but a lot of the crowd never got it.Even realising that he was being deliberately Bad missed the point.The 'joke' was subtle in it's unsubtlety ,dare I say,even sophisticated?
Many were so offended by his inability to locate their funny bones that they threatened to break Chippington's. But for the cognoscenti who took him to their heart, that was precisely Chippington's appeal.
Word spread. The cult grew. Yet as fame, fortune and the big time beckoned, Chippington retreated from the stage.Especially after his notorious appearance on daytime TV,on the execrably awful Pebble Mill at One;which stands as a living example of why alternative culture should never be in the same room as the mainstream (I too flirted with an invitation to appear on Pebble Mill with my 'crazy' sculptures.....we turned it down...would have been on with Zola Budd,the bare footed athlete Lol!). He had, in his own words, become "too popular". Choosing, instead, to opt out;after the Vindaloo Records tour of the USA,he stayed and found work driving trucks along America's Pacific Highway, before returning to a life of peaceful, uneventful obscurity in the West Country.
Nowadays, he's back,and currently touring the UK as support for The Nightingales again!?
"I was walking down the road the other day, when this chap said to me.An Hippie chap like: "D'you want some LSD man?" I said: "No thanks mate, we've gone decimalised now. Pounds, shillings, pence - no use to me any more."
Tracklist:
Good Evening To All Mankind
1-1 Improvisation 0:06
1-2 Good Evening To All Mankind 18:21
1-3 Monthly Return To Cornwall 53:42
The Human Being Years
2-1 Salisbury 3:10
2-2 Southampton 12:30
2-3 London 5:43
2-4 Preston 6:33
2-5 Stonehenge 7:21
2-6 Non Stop Party Hits Of The 50's 60's & 70's Side 1 6:41
2-7 Non Stop Party Hits Of The 50's 60's & 70's Side 2 7:12
2-8 Liverpool 11:38
The Big Time
3-1 Man In A Suitcase Side 1 21:38
3-2 Man In A Suitcase Side 2 24:41
3-3 Times Gone By 3:59
3-4 Drivin' Down The Road 1:58
3-5 Remember It Well 12:34
3-6 Weirdness 5:58
The Real Truth About Trucking
4-1 Call Me Rockin' 1:28
4-2 The Real Truth About Trucking Sides 1 & 2 40:04
4-3 The Wanderer 2:45
4-4 The Xmas Hit/Tesco 19:50
4-5 Pull Up 5:14
I Was walking DOWN the LOAD HERE!
Posted by Jonny Zchivago at 14:30

I've never heard of the chap, but I'm all in. Thank you.

“The other day, I was driving through Leeds you see in a thunder storm and there’s this lad in a top hat, short sleeve shirt, and It was the middle of the bus strike so I roll down me window as says “jump in lad, have a lift’ and he says “no thanks, I don’t need one. I live in a bungalow.”

I’ll have a little break now, but just just before a do, a parting word, don’t forget; never accept a lift if you live in a bungalow.”

Turns out ‘e’s got more than one, and they’re all insightful and incredibly funny, as the best comedy always is. https://www.youtube.com/watch?v=8DahbmuF3Xw

Many thanks for the upload, I've not been able to track this down for years! Missed the Nightingales gigs this time round unfortunately. Saw em both supporting the Fall and Ted was on form - about 1/4 of the audience were laughing and the rest were bored or annoyed. A lot of chat about decking.

My Pleasure,
Bare in mind that i was labelled 'Pure Scum' by an irate member of the great British public for supplying all things Nightingales on this wonderful blog,under the premise that i am a thief.....or is that just a cover story because he doesn't want anyone to hear or know of The Nightingales existence...it was probably Bono feeling the danger to his cash-cow,U2's,waning popularity.