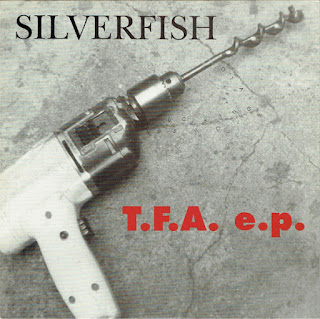 I thought this lot were american,but they weren't as well drilled.....geddit?...as american Noise Rock groups were,so I smelled a rat. They looked as if they met in a Pub,which is a dead give away,sure they're British,and that american twang in the lead screechers voice is because she's Scottish.....which gave me a reason to post this rather good EP,as I seem to be posting noisy groups from beyond Hadrian's Wall during the Grunge sickness of 1991 this week.
All band members have Dole Snooper avoiding names,like back in the halcyon days of Punk Rock, and that shouty female singer is listed as L.F.Rankine,Lesley to her new (in 1989) English friends.
While waiting for the next in a lengthening line of losing referendums which Scots Nationalists live in hope that one of them will eventually deliver the result that they dream of (be careful or it may just come true!). The Scottish are never slow in slagging off the English,and watching Braveheart over and over again(not bad for a film about a loser,a Scots tradition still adhered to faithfully today);but they can't seem to wait to escape to England at the first opportunity,and Lesley did just this,and ended up in one of the few bands in Britain not to have a funky drummer beat and an extraneous dancin' fool at the side of the stage in 1989.
Yep, you guessed it....Madchester was happening,or Shitchester as I prefer to call it.
Tracklist:
1.Total Fucking Asshole
2.Die
3.Driller
4.One Silver Dollar
DOWNLOAD it HERE! you total fucking arsehole!
Posted by Jonny Zchivago at 12:02

Referenda to divide and conquer! SNP fascists are used to stop Labour party from getting into power, those fascist Tories love moving boundaries, using looney left agent provocateurs, media liars and other spooky shit to keep in power. Look at the muzzled sheep during the covid hoax, believe any shit cos some pseudo-scientists, media, politician says so - they don't use their brains, don't reason, don't examine the evidence and use logic, no just swallow media lies.

On Topic,Can't disagree with most of that Ifor......although not a big fan of the Pseudo Science angle,that stuffs for the bacofoil hat brigade,however i found the obligatory mask wearing legislation a trifle pointless...and one man's mainstream media is anothers alternative media. Its an argument that flys in ever decreasing circles then disappears up its own arse. It would surely be the shadow govt's job to make the dissenters look like a bunch of nutters,and the dissenters to see normal people as 'Sheep' /sheeple. Somewhere within this fucking load of horseshite lies the disposable truth.

I thought these guys were kinda great. Weirdly enough they got signed to Creation of all places, surely not McGee's doing, made some EPs and an album. Few people seemed to care and they broke up. Singer went on to make a trip-hoppy solo album which I've never heard.

You're not easy to wind up are you? Christ.More scottish than the scottish,you've lived there too long.

It gets a bit wearing when English bigots have a go at us and then say 'it's a wind up.'
Nice blog. Shite banter.

Awww,I'm sorry if i've fueled the 'hard done by' levels even further by inflicting some very lame comments on your exposed nerves..i've moved on to feminism to feed my bigotry now,more interesting.

I saw Silverfish a couple of times, at Brighton Zap and Kilburn National, great live group, gave all the Yanks they often shared bills with a run for their money. Remember Th' Faith Healers? Equally great. The Camden Lurch haha.

Covid_19 a hoax? 6 million+ deaths worldwide and counting, that was no fkin illusion. The powers that be took full advantage with the cronyism and shock-doctrine, sure, but do us a fkin favour eh.

Ruby. That was Lesley Silverfish 's other project wasn't it. Silverfish Peel Sessions were great too. And that t-shirt: HiPS TiTS LiPS POWER, saw a lot of da yoot wearing those 😏