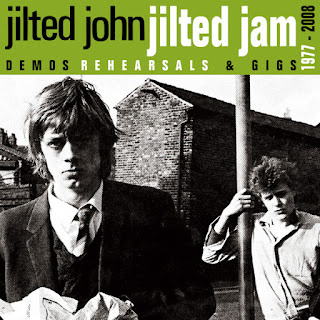 Another from the same northern monkey school of straddling that grey area between acting, comedy and music, would have to be,one Graham Fellows aka, Jilted John and John Shuttleworth. As was so kindly mentioned by someone in the comments section,he appeared on manchesters' Rabid records, along with stablemates Slaughter and the Dogs, John Cooper Clark, Chris Seivey (Frank Sidebottom),Ed Banger and the Nosebleeds;featuring none other than Vinni Riley of Durutti Column fame,and briefly Jilted John....before EMI snaffled him up.
Yes, "Jilted John" by Jilted John, was a top ten smash in summer 1978.Back in the days when You could say things like Slag,Bitch and Puff on television and not face being cancelled. As this clip of John's third appearance on Top Of The Pops demonstrates, beginning with Jimmy Saville cavorting alongside three possible victims while introducing John on live vocals.Sadly it was destined to become yet another novelty one hit wonder......but there was more....an album and a slew of flop singles.Not to mention demo's and even a couple of gigs!?
Essentially, Graham was more on the Actor who does music rather than the musician who does acting,which never works out great, does it David Bowie ? Actors who do music did have rather more sucess than the aforementioned disasters...namely Punishment Of Luxury, Shoes For Industry,  Albertos y los trios Paranoias and...erm....Jilted John.
I rather think the Jilted John Project would have been better left as just a novelty hit, but of course, when a major label is involved, they squeeze the juice out of anything they get their stupid hands on.Which reminds me of the time when the top EMI record executive met new signings Pink Floyd, and asked which one was 'pink'.
Jilted John would have been a musical in the west end if it was made now....it still could I guess,it's all there,the story sung in half-rhyme,the nostalgic characters,the teenage  memories,the hit, all that's needed is some naff choreography by Wayne Sleep and a few million quid from Andrew Lloyd-Webber's bulging coffers, and an unsanctioned Oligarch.The Public would love it.
John/Graham had another brush with minor fame,this time as an actor,playing Gail Tilsley's inappropriate young lover in Coronation Street.....before reinventing himself as retired Steelworker John Shuttleworth,who spent his redundancy on a secondhand Yamaha keyboard in a quest for fame as a singer songwriter. His greatest hit I would suggest, has to be "Pigeons In Flight" (more on the way....recorded in Dolby.
Tracklist:
1 Jilted John (Live At Erics, Liverpool, May 12th 1978) 3:28
2 Unknown Interview Clip 1 0:50
3 Jilted John (Original Demo, December 1977) 3:20
4 Going Steady (Live At Erics, Liverpool, May 12th 1978) 3:36
5 Unknown Interview Clip 2 1:00
6 Jilted John (What's On, Granada TV, April 1978) 2:43
7 Going Steady (Live At Big Chill, August 2008) 4:39
8 Baz's Party (Band Rehearsal, September 1978) 5:03
9 Radio Clip 1 (BBC Radio 1, November 1978) 1:17
10 Birthday Kiss (Live At Erics, Liverpool, May 12th 1978) 4:26
11 Shirley (Band Rehearsal, September 1978) 3:53
12 Unknown Interview Clip 3 0:33
13 My Love's Just Begun (Unreleased Recording, 1979) 3:24
14 Baz's Party (Original Demo, 6th August 1978) 6:17
15 Radio Clip 2 (BBC Radio Manchester, November 1978) 1:39
16 Birthday Kiss (Live At Big Chill, August 2008) 4:50
17 Paperboy Song (Original Demo, July 1978) 4:09
18 Radio Clip 3 (BBC Radio Manchester, November 1978) 0:55
19 Keira Knightly (Live At Big Chill, August 2008) 2:39
20 Stoodup Stephen (Original Demo, January 1978) 6:08
21 Debbie, Debbie (Live At Erics, Liverpool, May 12th 1978) 2:42
22 Trendy Wendy (Original Demo, April 1978) 4:15
23 Jilted John (Live At Big Chill, August 2008) 5:10
24 Sharon's Song (Original Demo, Incomplete, Early 1978) 1:14
DOWNLOAD HERE! you Slaaaaaags!
Posted by Jonny Zchivago at 13:43

Can I be cheeky and ask if the CD credits who plays on the Erics recordings? They're great.

As far as I can make out, the live group was these reprobates: Ian Morris and Mike Doherty (of The Smirks) Drums and bass, Bernard Kelly (Gordon) Backing Vocals, Colin Goddard (of Walter and the softies) Gtr, John Kelley(Gordon's Brother) Guitar.