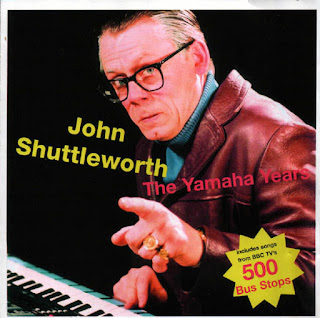 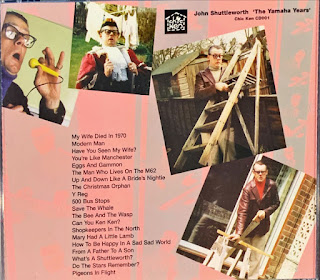 Nooooo!...John Shuttleworth ,like the Tooth Beaver, is not real. He is the comedic creation of the artist formerly known as Jilted John,also known as Graham Fellows,the actor who played Gail Tilsley's teenage lover in Coronation street......her husband, Brian,played by one of the finest actors that ever haunted the cathode ray tube(i Jest of Course) Chris Quentin, would have said something like "I'll Flamin' Kill Him!" when he inevitably found out. Poor Brian got knifed in 1989,he was stabbed at 8pm in the Monday episode,but the ambulance didn't turn up till 7.30 Wednesday evening for the next installment......I'm sure John Shuttleworth, second wife Mary,and kids, Darren and Karen, would have been watching those fateful nights in UK Soap Opera history.
Coronation Street is built on foundations of northern camp humour,and in contrast to its more serious soap rival, was famed for having actors who wished they were comedians,whereas East Enders,the London one, had Comedians who wished they were actors.
In the case of John Shuttleworth, he was very much a case of an Actor who became a comedian,via music,and his most enduring character still is the Redundant Steelworker from Sheffield who reinvented himself as a singer songwriter,and his fabulous Yamaha keyboard.
His tunes are hilarious of course,and here we have a collection of his finest efforts to date,and Yes....it does include "Pigeons In Flight.
Tracklist:
1 My Wife Died In 1970
2 Modern Man
3 Have You Seen My Wife?
4 You're Like Manchester
5 Eggs And Gammon
6 Man Who Lives On The M62
7 Up And Down Like A Bride's Nightie
8 The Christmas Orphan
9 Y Reg
10 500 Bus Stops
11 Save The Whale
12 The Bee And The Wasp
13 Can You Ken Ken?
14 Shopkeepers In The North
15 Mary Had A Little Lamb
16 How To Be Happy In A Sad Sad World
17 From A Father To A Son (The Burial Song)
18 What's A Shuttleworth?
19 Do The Stars Remember?
20 Pigeons In Flight
DOWNLOAD a fine argument for redundancy HERE!

This is truly remarkable. Thank you for this and everything else. Some rays of light in the darkness.

I think Putin could do with a little John Shuttleworth in his life.....before he's poisoned by his most trusted associate.

Pure genius. Not heard this in a very long time.

I feel like an important door has just opened...