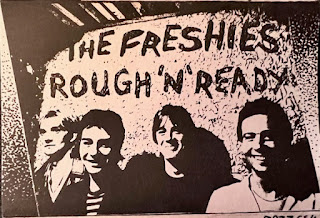 They could have been bigger than the Buzzcocks,but ended up not quite as good as second album Vapors.They,at least had "Turning Japanese";whereas the best The Freshies could muster was "Yellow Spot",which wasn't even as good as The Buzzcocks' worst single......"Why She's A Girl From A Chainstore",written by the talentless Steve Diggle.......ironically The Freshies closest shot at the charts references that Diggle double A side,called "I'm In Love With The Girl On The Manchester Virgin Megastore Checkout Desk",which had a novelty value about it I suppose,and at least they got to play it on legendary but crap kids pop show "Get It Together" with the great Roy North (as previously referenced in the Phil Hartley of Bogshed fame post wot i dun last weeek-ish or so).
This cassette was The Freshies going really New Wave,highly competent,well-crafted,rather too clever, power pop non-hits for the lapsed Blondie fan next door.If they had Chris,the singer,writer etc,in character as his alter-ego Frank Sidebottom,they would have definitely been bigger than The Buzzcocks,well at least bigger than The Vapors....maybe bigger than even 'Department-S'?
You may have noticed that I am referring to all this in the Past Tense as both Frank and Chris are dead actually.So we'll never know beyond visiting the Power Pop Astral Plain where everyone gets to be number one for a day.
Tracklist:
A1 Yellow Spot 2:28
A2 Yeah-No, I Know 2:29
A3 Yesterday/Tomorrow 2:23
A4 Oh Girl 2:05
A5 Photograph 2:26
A6 New Edition 2:28
B1 One To One 1:46
B2 House Beautiful 2:43
B3 We're Like You 2:17
B4 My Tapes Gone 2:51
B5 No Money 4:00
B6 If It's News 1:48
DOWNLOAD ready and roughly HERE!
Posted by Jonny Zchivago at 23:53

I knew Chris a little and he was always a bit disappointed that success came via Frank after years of trying as a serious pop act.

Mainly because the Freshies weren't very good and Frank was a work of near genius.